I've not yet given up on skiing. I think I'll be doing that until at least July, which means that I'm going to be a really crappy runner this year. Oh well. . .

This morning (on June 13th!) before work, Billy Demong and I skied from the White Pine TH to the top of the Pfeif, traversed out of Maybird and skied a shot into Red Pine, climbed Lake Peak, and skied a shot into White Pine, and then skied out.  We started out in trail shoes, but very quickly, we realized that we could pretty much skin from the car, and changed into our ski boots.  For those interested, coverage up high is very good.  Skiing is variable, but generally good early in the morning and especially up high.  We were skinning by 5:30 and done by 10:00 am.

On Saturday, I got to spend some time with my family on the San Rafael River.  It's a seasonal river that is floatable at 300 cfs.  On Saturday, it was pushing 1000 cfs.  We had one close call when my dad and his canoe and got swept under a big cottonwood tree that had fallen across the river.  Floating through the 17 mile stretch without having to expend a whole lot of energy was welcome.


On Wednesday morning before work, Jon Schofield, Tom Diegel,  Jason Dorais and I did our attempt at a fast and furious "run" up the West Slabs.  Having "skied" it a month or two ago, and inspired by Jared Campbell's 1:01 car-to-car time (wow!), I was anxious to give it a shot.  I figured if we could "ski" a 5.6 rock climb, we ought to be able to solo it.  Good logic right?  Our time was nowhere near Jared's, and the glissade down the Apollo Couloir was almost scarier than skiing the West Slabs.  But it was a success and something I might incorporate into my routine this summer.  Here are a couple video links that document some of the shenanigans that occurred:  (a) Jon descending Apollo in style, and (b) Jon's good friends, courtesy of Jason Dorais. 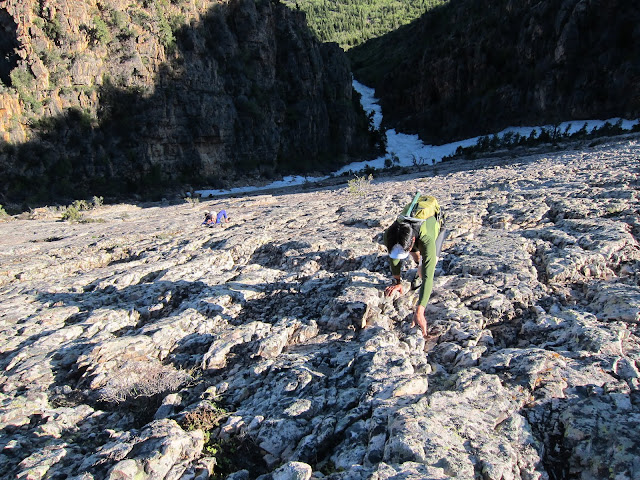 A few years back a few guys were keeping track of doing a loop run that started at the base of the West Slabs, went up and over, down the main hiking trail from the summit proper and then back on the roads to the car. They'd do it each week and record their times. I've been thinking of starting it up again. Any takers?