North Thunder via Bells out Coalpit

This morning, Brother Sam, Chad, and I toured from Wasatch Blvd., up Bells Canyon, through Thunder Bowl, and to the top of North Thunder Mountain.  Then we skied the Coalpit.  Great tour!

Hiro, my youngest son, turned 2 yrs old a couple months ago. For Christmas, he got a pair of ski boots, size 14.5 mondo. As far as I can tell, no one makes boots smaller than that. He can stick his little foot into the boot without unbuckling it. And he does that quite often. Lately, several times a day. Then he clomps around the house. At least he doesn't sleep in them -- something he did when he got them. I think the toes of everyone in the house have been stepped on by Hiro and his ski boots.

Given his enthusiasm for the boots, I assumed he would be equally enthusiastic to ski. Plus he talked a good game, telling Bart that he was going to go ski with him. But when the actual moment came and I latched him into his little skis he freaked out a little bit. And since Christmas, he hasn't been willing to entertain the thought of skiing. Just boots. The sight of skis causes him to wrinkle his face and cry a bit.

However, this week, we had a breakthrough moment and as of yesterday, Hiro has decided that boots and skis go well together. So, tonight we had our first ski lesson -- dryland training, on carpet. Here is a video (I am "daddy" and "Buster" is Hiro's nickname):

My other two kids, Ethan and Miya, both started skiing at 2ish or 3. I'm definitely not a pro at teaching kids, but here are the steps we have generally followed and that seem to work:

Step 1: The Tow I've found that towing the kids around initially and letting them get the feel of having their feet bound down and sliding on snow (or carpet) is a good way to start.

Step 2: The Pizza Slice Once they are comfortable and happy being towed, we take it to the next level: the "Pizza Slice," which with an edgy-wedgy is quite easy for a little person. All he or she has to do is step outwards.

Step 3: The Harness I have a harness made by Lucky Bums that has worked well. I've yet to try it on Hiro, but I will soon. With the harness on, I can control which direction they go, and stop them if necessary. At first, I use the harness a lot to control them, but soon enough, they pick up the snow plow.

Step 4: The Turn I struggle with teaching my kids to turn. They like to just go straight. But, one way that is effective is to simply reach one arm up into the sky. I ski in front and we play follow the leader with me raising my arm and the child doing the same thing, causing him or her to turn.

Step 5: Ditching the Edgy-Wedgys Depending on the kid, this may be hard, or it may be insignificant. With my daughter, I found that her 3 year old legs weren't strong enough to keep a snow plow without the assistance of edgy wedgies. Some instructors say that edgy wedgies are evil, but I think that for small children they work miracles. So, my thinking is, use them until the kid doesn't need them anymore.

I think Hiro is ready for the Harness. We'll see.
Posted by Jared at 9:54 PM 5 comments:

'Twas Not to Be

One of my objectives this year was to make the 2011 US Ski Mountaineering Team.  To qualify I needed to do well at a series of races, held Jan 8 (Nationals at Jackson), Jan 9 (Targhee), and January 14th (Sunlight, CO).  And I'm sorry to say that I didn't do well enough at Jackson, skipped Targhee, and couldn't get it done at Sunlight.  So, no US Team for me this year.

At Jackson, I was flu-ish, but was drawn there because I didn't want to miss the largest gathering of skimo racers in the sport's history.  It was exciting and inspiring to line  up with a multitude of skimo racers on US snow, and confirmed to me how much I like the sport. 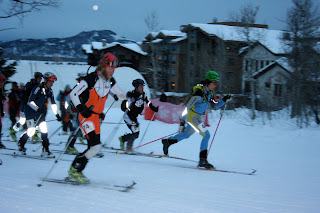 (Photo Credit: Powder Mag)
Unfortunately, I couldn't match the high output of the race's leaders, and lost the lead group early on in the race.  I ended up finishing 15th or so, way out of consideration for the US Team.
I skipped Targhee, hoping that I could take that time and use it to recover for Sunlight.  While I think it helped, by the time Sunlight came around, I hadn't gotten rid of  the chest congestion and pesky cough that has been plaguing me since Christmas.  I went anyway, hoping for a break.  During the Sunlight race, there were a few times when I was with the qualifying group or when the qualifying group was within striking distance, but I had a rough time breathing.  Then, at a critical moment during the 2nd descent, my right boot broke.

With some prodding by Scheefer, I decided that I would plod along and finish the race as fast I could.  My skinsuit held the top of the boot to my leg, but it was floppy on both the up and the down.  And on the 3rd climb, I knew that my chances of making the team were gone.  As I postholed with one foot and skinned on the other (since I had lost a skin and didn't want to bother putting a new one on) into the last major descent, I had to laugh at the sorry shape I was in: lungs heaving, postholing with one leg, sliding on the other leg with a broken boot, and carrying a ski in one hand, and a iced up, crusty skin in the other hand.  That sorry picture should have been a signal to me, but I kept going.
The last leg of the race turned into a rally against Andy.  And in a moment of poor judgment, I tried to nip Andy at the finish line.  I failed, and instead crashed into a static, steel, ski rack.  Perhaps my broken boot had something to do with that.  The crash resulted in me getting strapped and taped to a backboard, taken to the hospital in an ambulance (while taped to a backboard, which is more uncomfortable than crashing into a steel ski rack), examined, x-rayed, and then released.  The final diagnosis was muscle strain, but no broken neck.  Phew!
Photo by Andy.
Of course, I'm disappointed that I missed making the team, but the fact is that I'm not performing at the level of those who made it on the team.  It's unfortunate that I trained hard and was on a good trajectory, but then lost a chunk of fitness due to illness, right when I needed it the most.  But, to mix metaphors: that's the way the slope fractures.
And now, time to focus on my kids, my yard, and some wild speed ascents and traverses.
Posted by Jared at 3:59 PM 5 comments: