In a similar vein of Born to Run (in which Tarahumara runners run the Leadville 100), two Nepalese runners are about to participate in one of Europe's largest ultras.  Fascinating I think.  Here are some articles about Project Davos: http://www.irunfar.com/tag/project-davos
Posted by Jared at 7:08 PM 1 comment:

Jon, Eric, and I got out this morning for a nice run in the high country.  We started at Alta, ran up to Albion basin, up the Catherine trail, down towards Brighton and around Lakes Mary and Martha and to Twin Lakes, up to Solitude, across the Highway to Heaven, up to Fantasy Ridge, to top of East Silver, then to West Silver, across the ridge to Flagstaff, and back down to Alta.  It was about 11 miles with 4500 vertical and took us 2 hrs 48 mins.  The "run" off Flagstaff was classic -- scree, no trail, and some bushwhacking at the end.  I really enjoyed the forest trails between Lake Martha and Twin Lakes.  Fun loop. 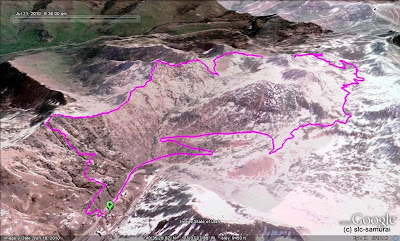 Jon brought his sweet camera phone and took some pics.  Me and Eric running up Albion road with Superior in the background. 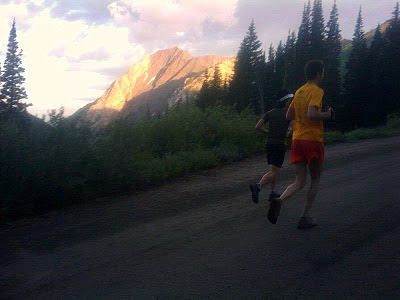 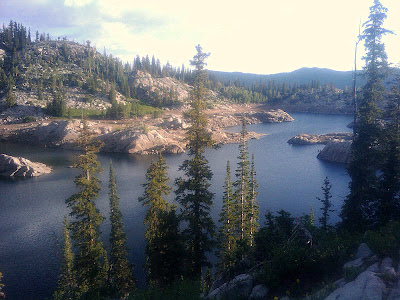 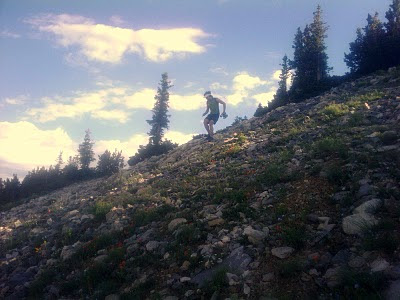 My Feet and Trail Shoes

Discovery of the right shoe is important in my decision that I might be born to run. I have, off and on, dabbled in trail running. And fall/spring skiing often requires a good pair of trail shoes. Pre-B2R, I had some Salomon and Montrail shoes. I went from Salomon to Montrail because Montrail was making some shoes -- the Hard Rock and Continental Divide -- that had some big fat heels. I thought that if I had a big fat heel, more cushion, and more support, maybe my chronic ankle problems -- problems that made running prohibitive -- would go away.

Of course, after I read B2R, I realized for the first time in my life that I didn't need to heel strike to run. And so I began my search for the perfect minimalist shoe. I didn't attempt to go barefoot, but I did acquire a pair of those funny looking Vibram Five Fingers. 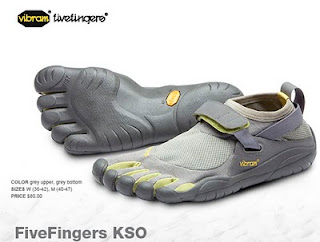 A few moments after I got them (I was at work), I put them on and went running. I was in dress pants and a dress shirt when I started, but after short while, I left my dress shirt hanging on a post and kept going, shirtless. I also rolled up my dress pants to my knees. And I proceeded to run up through a neighborhood and then into the foothills. By the time I got into the foothills, I realized in my over-exuberance that I had some blisters. A few moments after that, I realized that they were bleeding. I limped back down to the neighborhood, and once I got on sidewalk and pavement, I removed the VFFs and walked down through an affluent east side neighborhood barefoot, shirtless, and wearing dress pants rolled up to my knees.

My review of VFFs: Not suitable trail running for novices like me. They might make my feet stronger if I do easy runs on grass and the track. Otherwise, they will be great drift boat shoes.

New Balance MT 100
I've related an experience with these below. The first time I ran home from work in these, I DNF'd. In hindsight, my failure was more operator error, rather than shoe error. I was practicing my Tarahumara/Pose/Evolution/Chi (google them) running styles, or trying to at least. Turns out that I was over-emphasizing the forefoot landing and was running on my toes, which strained my Achilles and calf muscles. Also, my body wasn't used to the strains of running. And, I think the MT100s were too small for me. (Initially, I sized running shoes like I sized ski boots. Luke has advised and I have come to believe that a thumbnail length in the toe is the way to go.)

My review of the MT 100s: I'd like to give them another try in a larger size because I think I could like them. They are very light, and they have small heel to toe drop. The heel is only about 12 mm higher than the toe. What prevents me from giving them another shot, however, is the fear that they don't have enough traction for the kinds of trails I frequent and the uppers won't hold me on top of the shoe. Running downhill, I felt like my foot was going to burst through the front of my shoe. Then again, they are good enough for guys like Anton Krupicka . . .

La Sportiva Fireblade
I got this shoe because Karl Meltzer used to endorse them. He now runs in moon boots. Anyway, I also got the Fireblades a bit too small and they hurt my toes on the downhill. Like all La Sportiva shoes, the Fireblades are well-designed and reflect Italian craftsmanship. They also have a small heel-to-toe drop, about 12 mm I think. The toe box was sufficient and the heel cup was nice. The things that have prevented me from trying to get a better size and seeing if I can make them work is (a) I feel like there isn't enough cushion in the sole, (b) the sole is a bit stiff, and (b) I like knobbier traction. I think I could very well grow out of these concerns as I get more trail running experience and better form.

La Sportiva Wildcat
Compared to the Fireblade and the Crosslite (below), the Wildcat is beefier. In particular, it has a thicker and more cushioned sole, The upper is comfy and supportive. And they have a roomy roomy toe box. I got these in the right size, but after a 12 mile mountain run, determined that they weren't for me because the heel was too tall. If the heel is too tall, I have a hard time running downhill on my forefoot, which causes me ankle pain. Most of my shoe search has been designed to find the shoe that allows me to run in a way that makes my ankle pain go away. Like the older Montrails, the Wildcat actually causes me to have ankle pain. 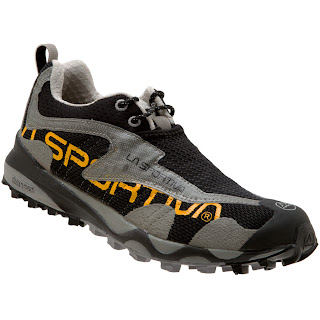 I like these shoes. Compared to the Fireblade, the toe box is narrower. It borders on being almost too narrow for me. The traction on the Crosslites is awesome, and I really like the gaiter on the front. What I'm not particularly thrilled with is the heel structure. There is less cup in the Crosslite heel compared to the Fireblade and the Wildcat, and this causes some heel lift. As my shoes have broken in, the heel lift has subsided, but the cup could be better.

Another thing I have noticed is that compared to my Inov8 shoes, there is less cushioning in the forefoot. I prefer more cushioning, but I think I could get used to the relatively hard sole of the Crosslite.

Finally, I wish that the heel to toe drop on the Crosslite was smaller. At about 12 mm, it doesn't cause me to have ankle problems, but I would prefer less. I plan on taking a knife to the shoes or taking them to a cobbler to try to reduce the heel lift.

I like these shoes and run in them now and again. 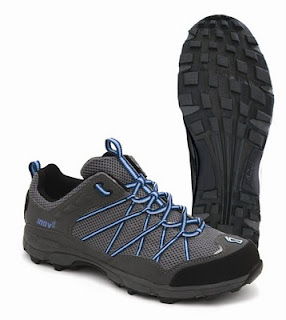 These are the shoes I currently train in. They have a small heel to toe drop. They are super flexible. They have great traction. They are relatively light -- 295 grams. The have a roomy toe box. They appear to be fairly durable. All of these are characteristics I've been looking for in a shoe. The only issue I have with the Roclite 295s is that I feel rocks pushing through, and they hurt my feet, but this is a minor issue, and  I've decided these are great shoes for me. 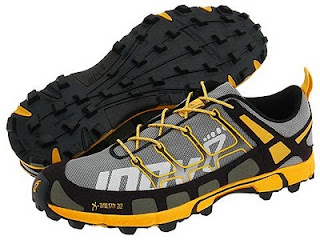 This shoe is very light for a trail shoe. And it's very minimal. Except for being as durable and having a roomy toebox, it has all the characteristics I like in the Roclite 295. In fact, the heel to toe drop in the 212 is even smaller -- 6 mm I think. Compared to the Crosslite, there is a lot more cushioning in the forefoot, although as they age, I think the cushioning will pack out. The first time I ran in the 212s was at the Wahsatch Steeplechase. I knew I was taking a risk, but I'm glad I did.

Compared to the Roclite 295s, the Talon 212s have a tighter upper. I like that because it holds my foot in place on the downhill.

Because the 212 is so minimal, there are a couple problems: (a) durability -- I've put about 30 miles on my shoes and the sole at the toe is starting to peel, and (b) the tongue on the shoe is so minimal that dirt and debris can easily enter the front of the shoe.

Hoka Mafate
Everything above this, I wrote a couple weeks ago. Since then, my feet have hurt almost constantly because I'm not yet conditioned for this running thing. So, I've got some Hokas on the way -- the exact antithesis of minimal running footwear. I'm hoping that I can still keep my running style, i.e., not heel strike, but have a lot of cushion for my wimpy feet.

Deep down, I know that my feet problem has less to do with shoes and more to do with needing to log more miles and ramp up gradually rather than going all in. But, if there is a shortcut, I will take it! 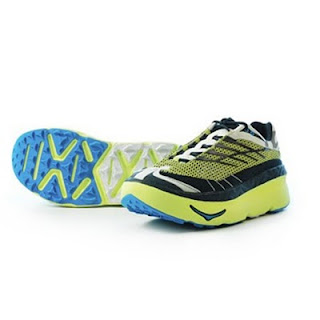 Missing a couple toenails with others black and blue.  Seriously, is this normal?

A pair of socks and shoes, lightweight shorts, a shirt (sometimes), a watch, a visor, a bottle, a few GUs -- no more, no less. It's liberating to make one of the most primitive activities sport. Running across a knife-edge ridge, hurdling rocks and deadfall on an overgrown path, pausing at an open stream to drink, and then sitting in it to cool down. Holding two pointed rocks in both fists, jamming them into the snow; primitive crampons. It's 9:00 in the evening, still light, and I am at the top of the Pfeiff wearing 8 ounces of clothing. I give my old friend a pat, and scramble off into White Pine.

I've been running the mountains to get ready for the Speedgoat 50. I doubt I'll be ready, but the challenge has been fun.

Last Monday, I ran/walked to the Olympus saddle with my brother Jordan from Okinawa. This route was 6 miles and about 3600 vertical ascent. 2 hrs 23 minutes.


On Tuesday, I ran Gobblers with Jon. We did some hardcore cross country downhill to connect some trails after we went off route. 8.2 miles, 3500 vertical, 2 hrs 20 minutes.


On Wednesday, I did some climbing with the family in Maple Canyon. After the kids left, Brother Sam, Brother Aaron, Ann, and I ran to the Haji, a 2 pitch climb that was easy for everyone except for me.


On Thursday, I ran to the Pfeifferhorn. I started at White Pine Trailhead, crossed into Maybird, tagged the Pfeiff, ran across the ridge to Red Pine, and went out Red Pine. Scenery blew me away. 9.9 miles, 4000 vertical, and 3 hrs and 6 minutes.

On Friday, Saturday, and Sunday, I celebrated Independence Day in Gunnison, Utah. In the evenings, we played "World Cup," and I came away with some sore legs, a sprained left ankle, a rolled right ankle, and a strained groin. Don't be surprised if my new endurance sport becomes soccer.