Below are some of my favorite photos of the Cathedral Traverse, which I did last week with Jason, Chad, and Andy.  While some of those guys feel like we "settled" for the Cathedral Traverse, I am thrilled to have traversed the Cathedrals.  Never before has an outing emphasized the difference between the mediums of rock and snow like this one did.  Never before has an outing emphasized how less-comfortable I am in a vertical environment when the medium is rock.  Will my foot stick?  Will it slide?  Not fully able to predict this, the traverse was a mental challenge for me.  I'm glad I had good partners and good guides.  Thanks guys.

On Wednesday June 13, 2012, Aaron and I decided that we had endured enough of the Denali weather and that it was time to go home. I walked to the weather board, and the forecast was more or less the same: unsettled today, partly cloudy tomorrow. To me, partly cloudy meant more snow. I had more or less convinced myself that I was satisfied with what we had accomplished, that I didn't need to stand on top of Denali, that I could come back another day.

Fortunately, the weather was unsettled enough that we were forced to second-guess our decision all day long. Looking for someone to snap me out of my uncertainty, I picked up the sat phone and called my friend Brian Harder. What should I do? I asked. He checked the weather and reported unsettled. But he also provided the sage advice that weather on Denali changes quickly. I might have commented that it had been snowing straight for over a week.  But Brian had spent lots of time on Denali.  Could he be right?

As the day wore on, Aaron and I became less resolved about leaving. Around dinner time, in an effort to unload some food, we had Colin Haley and Nick Elson over. In a more positive way that I thought was warranted, Colin asked, "did you see the weather report?" I said I had, but that it was no cause for celebration. Colin said, "are you kidding? Partly cloudy means good weather. That's the best you get here." I said, "Oh." If anyone knew the mountain, Colin did. Needless to say, by bedtime, our plan to depart had eroded. If the weather looked decent when we woke up, we were going for the top.

The next morning, the weather was decent.

By 8:00 AM, it was still well below zero.  Outside our tent, we could hear climbers bustling about, getting ready to go.  We buried our heads in our bags.

By 10:00 AM, we were suited up and ready to go.  With skins, we were able to make relatively quick work to fixed lines.  There, we were fortunate enough to benefit from a booter set by a French party of 2 and a Tahoe party of 4 (I said Seattle in the video, but meant Tahoe).  We stopped at the top of the fixed lines to tend to Aaron's cold feet, putting toe warmers under the tongue of his ski boots.

Around Washburn's Thumb at 16,800, Mark and Janelle Smiley overtook us.  At the 17,000 foot camp, the Tahoe group, the Smileys, and we took a quick lunch break and then continued up to Denali pass.

To reach Denali pass (18,200), you have to cross what is known as the Autobahn.  When I got to the Autobahn, my heartrate increased a few beats.  There was a fair amount of windloading.  And to cross the Autobahn you had to traverse an exposed 40 degree slope.  It's called the Autobahn because a number of unfortunate souls have slid to their deaths off the slope.  By the time I reached the Autobahn, I had passed the French team, and while I could see where the route went, the snow was a clean slate.  Excited and scared, mostly scared, I went into rando race mode and skirted across the Autobahn.

Until I reached 18,200, I really didn't notice the effects of the altitude.  Not so after 18,200.  Between 18,200 and 19,000 feet, I felt pretty wasted.  I didn't have a headache, but felt kind of bonked.  Perhaps it was because I pinned it across the Autobahn.  I ate and drank what I could.  We made a rookie mistake by taking insulated STEEL bottles.  Lips freeze to steel when it is below zero.  Aaron seemed stronger here, and I did what I could to hang with him.  At around 19k, the Smileys left us and rallied to the top.

Unfortunately, my camera literally froze and I didn't get many pictures of the summit ridge.  It was cool.

Standing on top of Denali was one of the coolest things I've experienced.  Fortunately, although we had experienced wind at lower altitude, there was only a breeze on the summit.  It was probably between 10 to 20 below zero--cold enough that we couldn't dally on the summit for long.  At about 19k, the altitude started to get to Aaron, but he battled upwards and stood squarely on top.  Later in the day, he said that it was a bit of a blur and that he felt like there was a baseball lodged in his skull.

Then, we skied off of Denali.  We skied the summit ridge, made turns on the face, and then tucked it across the Football Field.

After we reached the top of Denali, we didn't let ourselves relax.  Driven to movement by the bitter cold, we reminded each other to move mindfully, and to descend safely.  There was no straightlining and lots of sideslipping.  "Just get down safely" was our mantra.  We took our skis off at about 18,500 and walked to Denali Pass and then midway across the Autobahn.  Then, realizing that skiing was probably safer than hiking, definitely faster, we clipped in and skied down to 17 camp.

At 17 camp, we said our goodbyes to some our Camp 4 friends who had moved up to 17 Camp.  We also spent a frantic, cold hour trying to brew up and cook a ramen.  We eventually gave up, resigned to the fact that a Jetboil does not function at 17,000 ft.  Tired and cold, we continued our descent.

As it often happens on epic adventures, a moment of magic occurs.  While an argument could be made that the whole summit day was magical, I will forever remember the magic I walked through at 16,500 feet.  It was 11:30 PM and the sun was just setting, golden hour in the Alaska Range.  The sun's rays and the increased oxygen felt palpable.  This onset of physical comfort coincided with an onset of mental relief: having passed through the gauntlet (twice), at last we could relax.  We could genuinely enjoy the moment.  I raised my arms and axe.

Perhaps one of my favorite photos of the whole trip is the photo below of Aaron.  I had descended the fixed lines was on a mad mission to brew up, get some food, and go to sleep.  Apparently, at the bottom of the fixed lines, Aaron hung out for a bit and took this self portrait.  I think it pretty much sums up the day: frazzled, burnt, frost nipped, content, beautiful, end of the day. 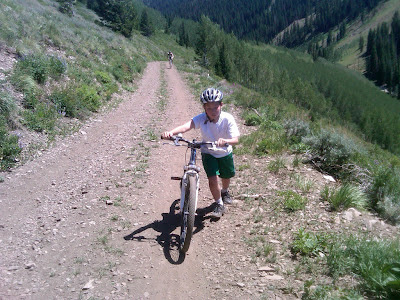 Dad, everyone in my class has been to Disneyland, except me.

Are we ever going to Disneyland?