Andy made a video of our last Teton trip. It's been pretty popular at Teton Outerlocal. Here it is:

October in the Tetons: West Hourglass and Middle Teton Glacier

Late Wednesday night, Andy and I blasted up to Jackson for some skiing in the Tetons.  On Thursday we met and skied with our friends Brian Harder ("Brain"), Nate Brown ("Dutchman"), and Kim ("Crusher").  The skiing was surprisingly good.  It took some effort to get to it, but what we found made that effort worth it.We skied the West Hourglass Couloir on Nez Perce and then climbed and skied the Middle Teton Glacier.  The headwall of the glacier was the real treat.  There we found soft consolidated powder stuck to a 50 degree slope.  From the parking lot we had wondered if winter was up there.  As Nate promised, after awhile the "Winter Switch" turned on.

Quick Notes:
- It was cold.  Probably below zero cold.  To stay warm on Nez Perce, I robbed everyone of their packs, sat on one, put the others on top of me, mooched Nate's puffy, and (to no avail) tried to get people to cuddle with me.
- There were 4 Men in Tights, one Woman in Baggie pants
- Kim impressed us all by by logging the same 8k vertical we logged, but on "heavy" gear, Havocs and Divas, thus becoming "Crusher."
- Upper East Hourglass was not skiable, but the lower part definitely was.
- No. of times Andy got pulled over by the law, 2; no. of tickets, 0
- Another great day on 64 mm waisted skis.
- 8k vert, 10 hr tour.  30 hrs door-to-door (SLC to Jackson to SLC).

Sometimes, I go out and have a nearly perfect day.  The weather is good, the body is good, and the head is good.  Nature seems to be good to me.  Things click.  And when I return, I want more.  I want to go replicate it, again.   But sometimes, I go out and have a really crappy day.  I find misery.  I hate that I am in nature.  And I want nothing more than to never go out again.  And when I return, a cloud hangs over me, and I want another chance.  I want to be better.  It's a vicious cycle. 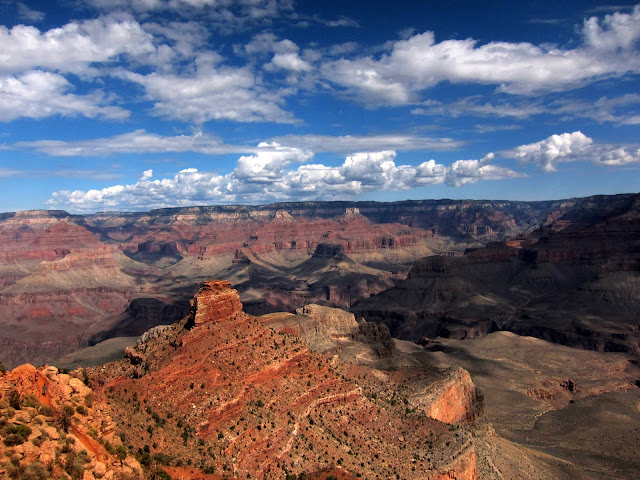 
My sleeping bag is crumpled up in the back of my Subaru.  I crawled out of it a few minutes ago.  I'm nibbling on a leftover Subway sandwich from last night.  Jason is soaking a ProBar in peanut butter.  We intended to have bagels, but we don't.  It's 38 degrees.  We strip off our jackets, slam the Subaru's doors closed, and start running off the North Rim of the Grand Canyon.


We've covered 13.7 miles and descended over 5,500 feet in about 2.5 hours.  Except for two rolled ankles--one mine and the other Jason's--we're feeling relatively good, not as fresh as we'd hoped, but good.  We're more or less on pace.  We want to run Rim to Rim to Rim, 42ish miles, and 10,800 vertical in under 10 hours.  We're at Phantom Ranch, less than a mile from the Colorado River, and will be heading up the South Kaibab Trail to the South Rim, ascending 5,300 vertical feet 7.2 miles.  If we want to stay on pace, we'll need to be at the top of the South Rim in 1 hr and 50 minutes.


It took us 1 hr and 51 minutes to ascend the South Kaibab trail from Phantom Ranch.  And it wasn't easy.  Perhaps we were driven too much by theory and not reality.  I felt a surge of adrenalin in the last 1/2 mile or so and we ran hard to the top, arriving breathless.  Although water was available at the South Rim, I only splashed it on my head, and didn't put any into my hydration pack.  I thought I had enough to get me to Phantom Ranch.  I didn't want to carry extra weight.  I was mistaken.

We just ran the 27th mile in 9 minutes 30 seconds.  The Colorado River is below us and we'll be crossing it soon.  It's hot.  I'm hot.  I'm out of water.  I haven't eaten much of anything for an hour.  I notice that I have goosebumps.  I'm hot, but I'm chilled.  I'm nauseous and I can't eat.  Uh oh.  Not to worry though, we'll be to Phantom Ranch soon.

I'm lying face first in a tributary of the Colorado River.  My feet are propped up on a flat rock, but everything from my ankles up, head included, is under water.  Water trickles into my ear, but I don't want to lift my head out of the cool water.  I

We're satisfied that we clicked off 29ish miles in under 6 hours.  We've got 13 more to go, mostly uphill.  Phantom Ranch lemonade tastes good.  My goosebumps are gone and I'm not as nauseous, but I feel like, well, I just ran 29 hard miles.  I firmly believe that my condition will turn around from here out.  It's not unlike anything I've experienced before.  I'll pull out of it.  Just need to get on top of my eating and drinking.  My legs will come around.

Self assessment: no power in legs and nauseous.  I need to eat to have power.  But eating makes me want to throw up.  I've tried several times, heaving without much success.  A little bit, but not much. I run a few steps, and then am relegated to walking.  I really ought to eat.  But I can't.  It's as if there is an impermeable barrier between my stomach and my legs.  They aren't working together.  So I settle with walking.  I don't like going this slow.  I look at my watch.  I'm doing a 16 minute pace when I ought to be doing a 11 minute pace.  Jason is probably bored.  We're not going to make our goals, and it will be my fault.  He tries to feed me a gel, but I reject it.  I need to speed up.  But I can't, because I have no power.  Because I can't eat.  Faster.  Eat.  Heave.  I am miserable, trapped in an odd paradox.  This sucks.  I encourage Jason to go on without me.

Jason is running away from me now.  I hope he goes under 10 hrs.  He's looking good.  He will.

There is one hope.  I have a secret weapon: Coca Cola.  I stashed a 20 oz bottle six miles off the North Rim. This should turn my legs around.  Carbonation, sugar, caffeine.  Eagerly, I un-stash my stash, open it, and drink.  Immediately I feel better.  I up the pace.  A few minutes later, I am successful where I have failed so many times on this adventure:  I bend over and vomit.  The color of the spew is alarming.  It's blackish.  But then I let myself taste it a little bit.  And it tastes like Coke.  I'm back to my painfully frustrating and slow 25 minute pace.  My secret weapon failed.  I've got nothing.


I'm resigned now.  That internal fire, the incessant motivation to go fast and conquer, is gone.  I just want to get back to the car and be done.  And I want to throw up.  I look around and am stunned by the view.  There is a mist above the rim; water trickles off the walls above me; thunderheads move with curious speed across the canyon.  I start reciting ancient time periods I learned in 7th grade: precambrian, paleozoic, cenozoic, cambrian, ordovician, silurian, devonian. . . . 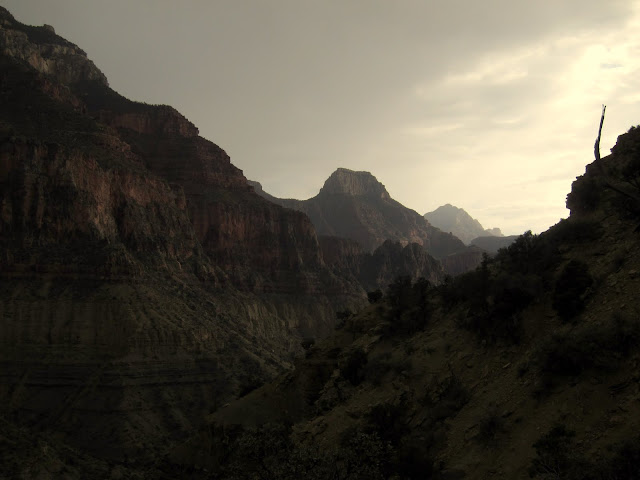 
As I begin to see where I am, I forget where I want to be.  I start to eat almonds, slowly, one at a time.

My body seems to have accepted the almonds.  Jason, who finished an hour ago, has walked down to join me.  I look at my watch and 10 hrs and 50 minutes have elapsed.  I'm not going to take more than 11 hrs.  The fire is back.  It's late, way too late actually, but it's back.  I start running.  I run into the North Rim parking lot and stop my watch: 10:57:22.


I just threw up a bit, but I'm holding it in my mouth.  I roll down the car window, spit, and it spatters on the car, inside and out.

Jason:  With me?  Or the Grand Canyon?

Me: The Grand Canyon.