The last couple weekends, I've enjoyed getting out with some climbers.  Generally, the steeper you go, the slower you go.  Hoping to avoid long drawn out boring ordeals, i.e. belaying, Sam and I scrambled up the NW face of Storm Mountain carrying a 30 m rope and a few select pieces of gear.  A week later, Jason Dorais power hiked up to Lone Peak Cirque, climbed the Central Thumb, and then ran back down.  Working some aerobic effort into the equation made the belay time worth it.

Lone Peak--Several Times, According to my GPS

My GPS tracks wherever I go.  And it provides an accurate account of what I've done.  Which is why it must be true that I climbed nearly every route (established and heretofore not established) on Lone Peak's summits, yes both of them, in about 4 hours.  Here are my data points to prove it:

And in case you want to verify:
I'm trading up for a Snoopy watch.
Posted by Jared at 5:43 PM 2 comments:

This essay challenged me. Very true, I think.

"The irony I cannot get away from is this: the energy and passion that call to our very core fill us with a life force that seems endless, but yet they also create a form of blindness to the ultimate reality we so dearly feel we touch."


Kayaking - Adding Death into the Equation
Posted by Jared at 2:03 PM 5 comments:

It feels like CX season.  So, my kids have been practicing their mounts.  My 2 yr old, Hiro aka "Buster," pretty much has it nailed (slight bobble on the second mount). 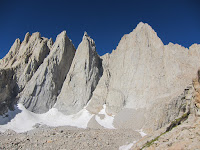 I'm fortunate enough to work with a few guys who like an adventure every now and again.  In the past, we've done bike rides, marathons, Rim to Rim.  Last week, our group set out to hike Mt. Whitney.  Whitney is the tallest peak in the lower 48, and because of its popularity, to be in its vicinity requires winning a lottery and securing a backcountry permit.   So, in the span of 56 hours, we flew to Vegas, drove to Lone Pine, CA, climbed Whitney, and then reversed the same.


My work group wanted a challenge beyond the more conventional Whitney Portal Trail, so we chose the Mountaineer's route, a route that ascends about 6,000 vertical in 6.5 miles.  Much of the route is a Class 2 and 3 scramble.  To those who are somewhat close to me, you should know that I was appointed the mountain guide for the day.  That is because I am a mountain guide, just one that gets lost every now and again and lacks the certain inconsequential paper credentials.  I committed that I would get the group to the top; after that, I had a plan of my own. 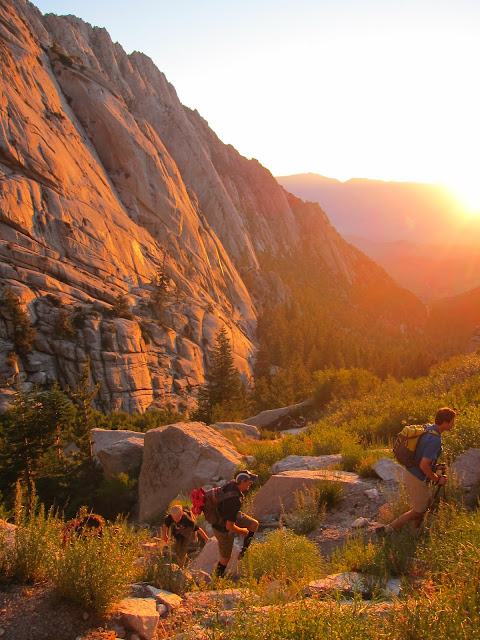 En route, we had a few odd diversions.  While crossing over a ledge section in the early morning light, Barry broke into song:

The shenanigans diminished as we climbed higher and as the scenery became more serious.  And soon, we were on the Mountaineer's Route.  Most of the guys in the group didn't have a whole lot of climbing experience, but they persisted and at around 1 pm (and about 6.5 hrs of hiking), we stood on the top of Mt. Whitney.


Round 2:  The Whitney Portal Trail

At the car, I reloaded my pack with food, drink, and a headlamp.  I left behind all the extra stuff, like my camera and jacket, which I later regretted.  And then I headed back up the Whitney Portal Trail.  It was 4:00 pm in the afternoon.  At 8000 feet, it wasn't too hot, but slightly uncomfortable.  I had been on my feet for almost 9 hours, and they had traveled 13 miles and 6000+ vertical over some pretty rugged terrain.  I had a solid 22 miles and 6000+ vertical ahead of me.  And Whitney looked like it was really really far away.  And I almost became discouraged.  I kind of wanted to just call it a day.

But then I took a sip of the warm Coke that I was holding.  And I reasoned to myself that flying and driving 100s of miles and getting a permit to do 13 miles simply didn't make sense.  And so I started jogging.  I stopped thinking of where I wanted to go, and just focused on where I happened to be.  Then I turned on my Ipod and was greeted by none other than Jon Bon Jovi.  And from "Bad Medicine" on, everything made sense.  All sense of tiredness, discouragement, and the cold I'd been nursing seemed to rest.  And I ran.

As I ran, I watched my Garmin report a set of 15 minute miles, then a set of 20 minute miles, and then as I climbed above 12k, I had to walk, especially up the 99 or so switchbacks (that's not an exaggeration).  At the top of the switchbacks, where the High Sierra and the John Muir Trails become one, a sign informed me that I had just entered Sequoia National Park.  I wondered what it would be like to run or ski all or part of either of these trails, and was stopped short in my tracks as the Sierras -- all the way to Yosemite -- came into view.  But, alas, no camera.

At this point, the euphoria of Coke, Bon Jovi, and Zen thinking began to wear off.  It nearly completely dissipated as the summit of Whitney appeared waay waaay out there.  Luckily, the 14k 2+ mile traverse to the summit is probably one of the most scenic in the US, and so it went relatively quickly.

About 3.5 hrs after I began Round 2, I stood on top of Mt. Whitney for the second time of the day.  I hung out for a few minutes, talking with some French climbers who were spending the night at the summit.  They had done a bit of rando racing in Europe and told me about some of their trail races.  Of course, they mentioned the UTMB, something they obviously took pride in.

The 14k traverse was better in reverse.  It was downhill and very runnable.  And I happened to be running it just as the sun was setting, in the alpenglow.  On the right, several thousand feet below me was a valley dotted with high alpine lakes, and beyond that was Sequoia and Yosemite.  To left was a very steep granite face, huge spires and an occasional steep couloir; at the bottom was a glacial lake, and the lights of several backpackers.

Concerned that the temperature was dropping and that I wasn't carrying a jacket, I stopped to pick up someone's dropped glove.  With a bit of trepidation, I sniffed it to make sure that was just a dropped glove, and hadn't been used for some other purpose.  It didn't have that smell, but it smelled heavily of some deodorizer or fabric softener, which reminded me of the deodorizer used in Honey Buckets, and which, in turn, caused me to quickly drop it and risk 2 cold hands on the descent instead of just 1.

As I descended the 99 switchbacks, it got darker and darker, and then black.  By then, my Ipod was pushing out some mellow baroque chorale pieces, but I shut it off and turned my head torch on so that I wouldn't run off a cliff.  The darkness was a hindrance in descending, and I found that my downhill mile splits were about the same as my uphill mile splits.  But other than that, I was in a good place mentally and physically.  I was pleasantly surprised that it was about 10:00 p.m., I had been going all day, and that I was still running in the mountains with relative ease.

It was about that time that I encountered a backpacker, carrying a big backpack and an ice axe.  When I approached he said,

"Man, am I glad to see you!  I was seriously worried about you when I saw you coming up the switchbacks so late in the day.  I had flashes in my mind about seeing a newspaper article about a dead Japanese tourist on Whitney, wearing just a t-shirt."

I laughed and apologized for causing him to worry.

And I suppose I should have let our conversation end there.  But I didn't.  The braggadocio in me spilled over, and I said, "And that was my second time."

"Nope, today."  He was very complimentary, and that felt good.  We went on to talk about his trip and where he was from.  And then I continued on.

The last 3 miles of the Whitney Portal Trail are pretty cruiser, even in the dark.  After a small detour where I ran to Lone Pine lake and stumbled into some sleeping backpackers who pointed me in the right direction, I was able to open it up.  My Garmin showed a 13 minute mile, then a 12 minute mile, then a 10 minute mile.  And then, after 35 miles, nearly 13k vertical, and 16 hours on my feet, I was back at the Whitney Portal Trailhead.
Posted by Jared at 3:18 PM 4 comments: