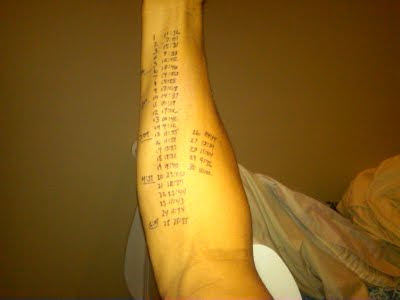 In Utah, July 24th is a state holiday, celebrating the day when the Mormon pioneers arrived at the Salt Lake valley and Brigham Young proclaimed, "This is the place!" Granite was important to the early settlers, and the LDS church still owns a mountain of granite in Little Cottonwood Canyon. Granite is important in modern times for a variety of other reasons . . .

Today, Brother Sam, Anne, and Cousin Isaac celebrated the 24th of July and the discovery of the Wasatch by climbing some granite in Little Cottonwood Canyon -- Pentapitch. 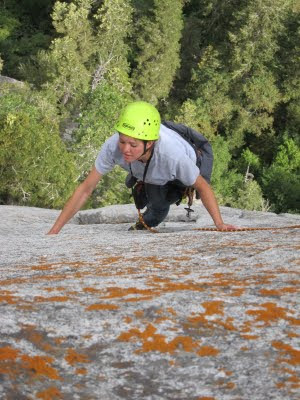 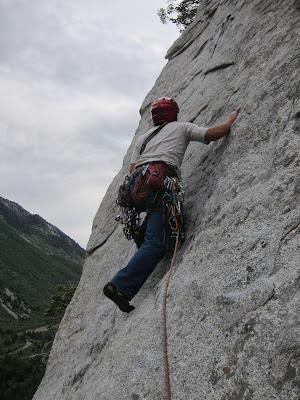 Go Sweetie(s)!  Anne at the top of the Pentapitch.  Sam is on the crux of the route and led it with ease, but only after I shouted, "Go Sweetie.  You've got it Sweetie.  I love you Sweetie."  He apparently responds well to that.  Me?  I plugged a cam in a finger crack, and pulled on it 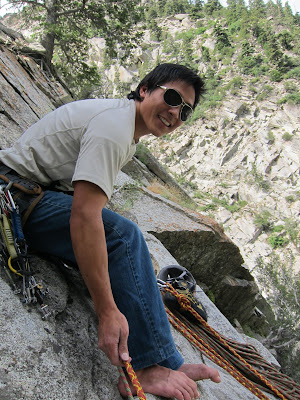 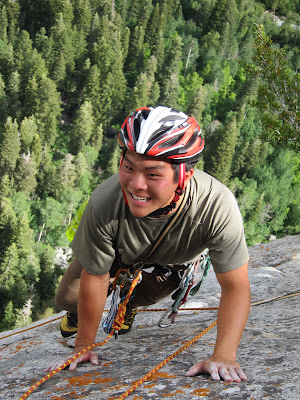 Since July 1st, I've tried to be a runner.  Several months ago, I signed up for the Speedgoat 50k, which occurs on July 30th.  At the end of last year's Speedgoat I vowed that I would be back and better.  By July 1st of this year, not having really focused on running yet, but motivated to keep my promise to myself (at least to run Speedgoat again; have some major doubts about being better though), I began a mini training cycle.
Between April and July, I have done a few runs and hikes and one marathon.  On top of that, I have done several longish days (7-8 hrs) in the mountains, probably every 10 days or so, mostly in ski boots.  Fitness-wise, that has given me a base.  And I'm encouraged that my body is acclimated to those longish efforts.  But what about running-wise?
Since July 1, 2011, my training is summarized as follows:
10 runs
95 miles (mostly in the mountains on technical trails)
26,000 vertical gain
That small block of training has been fruitful.  By Saturday (7/16), I was toast.  On that day, Andy Dorais, Tanner and I ran from Wasatch Blvd. to the Canyons resort, which ended up being just shy of 23 miles and 7500 vertical.  We started off with Grandeur (3k vert in 2 miles), went off the other side, hit the Pipeline, ran up the Millcreek Freeway to Big Water, up the Great Western trail to the divide, and down to Canyons resort.  On the ups, I had nothing.  That was due in part to the 15 miles I did the day before.  I could barely hike, and Andy and Tanner had to wait for me.  But I was encouraged to know that I'd get some good over-distance and over-compensation as a result, so I plugged along.  Surprisingly, the downhills felt ok, and my feet (which have been a limiting factor since I started running last year) felt relatively good.
From now until Speedgoat, I'll continue my training.  I won't do a full taper because I really haven't done a full build.  And I think I'm resigned to the fact that Speedgoat will just be a training event for things to come later in the year.  Still, I'm looking forward to it.  And I'm looking forward to employing a pacing strategy.
Question for experienced ultra runners or endurance specialists:  In a 50k or 6 hour (more like 7+ for me) event, do you make a conscious effort to keep your efforts under threshold?  Or are you willing to pin it on the up and hope to recover in other places?
Posted by Jared at 11:46 AM 7 comments: