When it comes to ski boots, I feel like I have experienced a lot. My history is as follows: 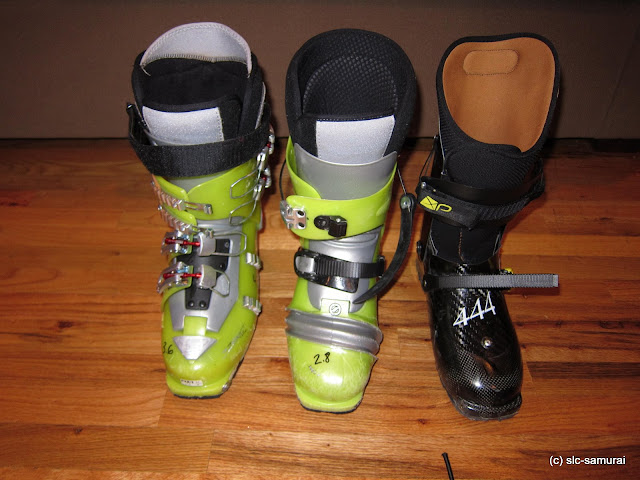 As I write out this list, I wonder if I've missed any. Maybe I have, but these are the ones that stick out. I'm uncertain as to whether to be proud or embarrassed about this list. It definitely is not an illustration of fiscal responsibility or sustainability. One day, I might have to explain to my son that I spent his college tuition on ski boots. On the other hand, I can say that I have gone to school of ski touring boots. As a result of the "list," I have a keen sense of the good, bad, and the ugly.

Way back when when things were simple, which was really only a decade ago, boots were boots. Boots attached to skis and I put my feet into them to go ski. Those were happy times. But they were also slow and unsteady times. No free pivot. And to get down the hill, you needed to drop a soulful knee.

Scarpa's F1 was revolutionary. I remember the hype before it came out. I remember scouring telemarktips.com for info and beta on what was then considered to be more of a concept boot. I remember AT Apostle bragging that he was posting on ttips while wearing a pair of F1s. F1s were rad. They were lime green. At the first ever Powder Keg, I remember seeing them for the first time. They were unlike anything available at the time. They walked well, even better than telemark boots. They were relatively light -- much light than a Scarpa T1. And they skied down with a fixed heel. The Euros went crazy with them, drilling them out to make them lighter and a cottage industry (in a literal sense) specializing in F1 boot mods was formed. 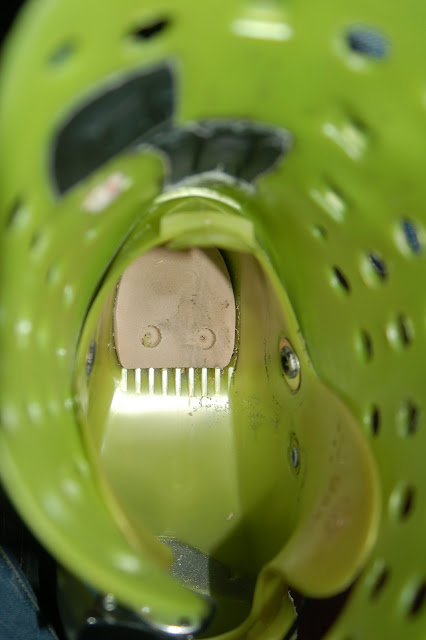 As I write this off-the-cuff rendition of AT boot history, it occurs to me that Dynafit may have lead the charge into the world of light, walkable, skiable boots. I'm pretty sure Dynafit's Mountain Lite/TLT line came before Scarpa's F1. In any event, early on, it's certain that Scarpa's F1 was much more ubiquitous. Dynafit's time would come though. 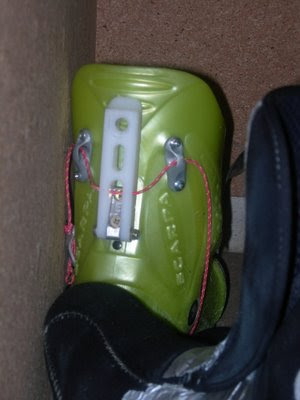 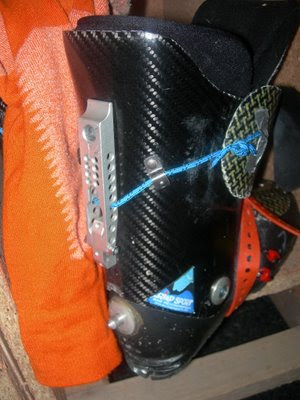 As racers whittled, drilled, and modified the Scarpa F1 to suit their needs, others came up with other alternatives. Benedikt Bohm took a Dynafit TLT boot lower, and then fitted it with a carbon upper and a throw reminiscent of a Scarpa F1 throw. I think he might have skied off a 8,000 meter peak on that boot. And then guys like Pierre Gignoux started building all-carbon boots in his garage. Pierre was a top racer (once holding the record for the fastest ski ascent and descent of Mont Blanc) looking for a top solution. He built a boot, loosely modeled after the F1's rear one-step lock down rear throw. This boot was much much lighter than its pebax cousins.

Taking a step back, I think that for several years, the backcountry community viewed the F1 and its iterations, and perhaps those who used them, as outliers. These were not boots to seriously consider for serious touring or mountaineering. While more legitimate than a gimmick, they weren't a "real" AT boot. In a sense, this sentiment was correct. The F1 had a pretty awkward fastening system. The heel throw was bulky and got in the way. The duck-billed, bellowed toe was not ideal for rock climbing and mountaineering. Later F1 versions addressed these issues with slimmer and ergonomic heel throws. The duckiness of the bill was likewise eliminated.

This is not to say that people, like myself, did not resort solely to the F1 as a backcountry boot. The truth is, after experiencing the walkability and efficiency of a F1, how could we happily ski anything else? I tried to ski the Scarpa Matrix and the ZZero Green Machine, but was frustrated with their inefficiency on the uptrack. Skiing those boots was like putting my ankles in casts.

Then Dynafit came out with the DyNA Race boot. While racing in Europe, I bought a pair. These boots were substantially lighter than the F1. I think of these boots as a refined version of Benedikt Bohm's modified TLTs. I speculate that because Scarpa protected rights to its heel throw, Dynafit did/could not incorporate that in its mass production boot. Dynafit came out with the side-throw. Like Bohm's custom boots, the upper cuff was carbon fiber. Like the F1, transitioning from walk to ski mode was a one-step process.  The DyNAs were superior to the F1s in weight, walkability, and skiability.  I quickly adopted the DyNA as my do everything boot.  My speed ascent/descent of the Grand Teton was in DyNAs.

The DyNa Race boot certainly had an impact in the race world. It was one of the first mainstream boots to compete with the F1 (in contrast to garage-made boots). But I think the true significance of the DyNa is that it gave birth to Dynafit's wildly successful TLT 5 boot. I view the TLT 5 as the boot that bridged the fringe group of racers with the core backcountry community.  The TLT 5 was a real and acceptable boot for racers, backcountry tourers, and ski mountaineers alike. 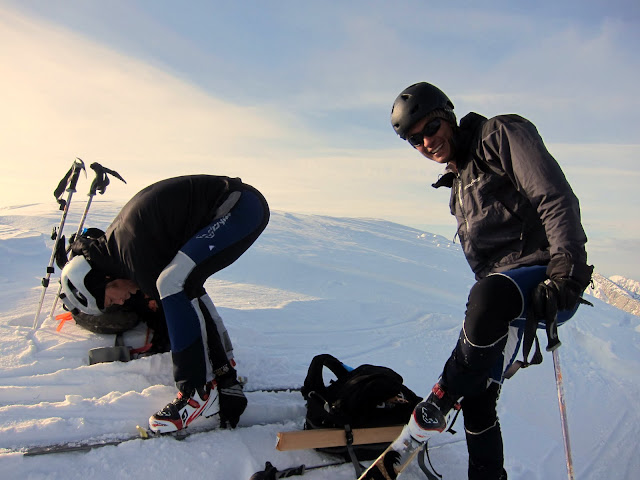 The thing about all race-bred boots from the F1 forward is that they all had a highly articulable cuff.  Yes, weight was reduced.  Yes, the fastening system was a one-step process.  But the most important characteristic of these boots in my mind is the walkability of these boots.  Rather than being alpine-boots-made-to-walk, these were first and foremost walking-boots-made-to-ski.  And this makes a lot of sense.  For any backcountry skier or ski mountaineer, the majority -- I would say 90 percent -- of time "skiing" is spent walking.  If I were forced to choose between weight and walkability, I would choose walkability.  Because walking with two chunky casts on my ankles is simply not fun.

Nowadays in the Wasatch, it is not uncommon to see a TLT 5 or a TLT 6.  Four years ago, I'm pretty sure I knew everyone on who owned a pair.  My choice is La Sportiva's Spitfire, a true backcountry and mountaineering boot that I chose to employ in my ski ascent and descent of Denali.  Still, for every skier in TLTs, Spitfires, or F1s, I see several skiers in big-not-very-walkable AT boots.  And by that I mean everything from Scarpa's Maestrale to Dynafit's ZZero/Titan to Black Diamond's Prime/Quadrants.  I'm not saying these boots are bad boots.  I'm sure they ski very nicely.  But for me, if I'm spending most of my day walking, I also want a boot to do that nicely too.  And while I am admittedly odd, I don't think that is an odd preference. 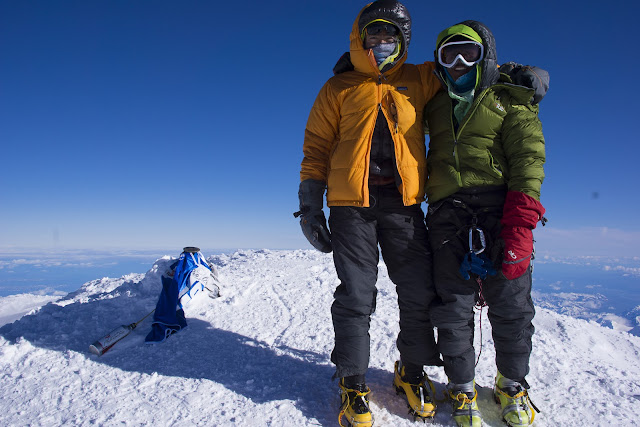 So why do people persist in skiing in not-very-walkable boots?  I'm sure many eventually change when they upgrade their setup.  Not everyone buys one or two pair of boots a year.  But I think the real reason is that the largest backcountry segment is willing to compromise walkability for skiability.  Case in point: just last week I skinned past a guy in Lange alpine boots, Marker bindings, and alpine skis.  I'm sure his setup weighed 4 times what mine weighed.  4 hours later, I saw this same guy.  He had just skied the South Face of Superior solo on a considerable avalanche day.  This was a hard core dude.  And he was willing to haul around 14 pounds per foot because he wanted performance on the down.  To each his own.  I respect that.

But, what if you could have walkability and skiability?  It's not far off.  When it comes to boots, this is the future of the ski industry's only growing segment.  It's not reasonable to think that everyone will become racers and buy into the pure race mentality.  But it is reasonable to think that if given a choice between a boot that skis well and walks well and a boot that skis well and doesn't walk well, skiers will choose the former.  Every time.

I said the time is not far off when mainstream ski tourers (as opposed to extreme racer fanatics) can have a boot that really skis and really walks.  That was not completely true, because there is one such boot out there: Sportiva's Spectre.  It's a four buckle boot that is as supportive as most alpine boots.  And it walks like a TLT 5/Spitfire.

The history of AT boots is rather short.  It's been interesting and admittedly satisfying to see the radical rando racing segment of the sport inform and arguably transform the accepted norms of backcountry skiing.  It's been interesting to see various companies innovate and compete.  In particular, it's interesting that while Scarpa got the ball rolling with its F1, Dynafit advanced the baton substantially with its TLT 5.  Scarpa really had no answer for a couple years although its new and improved F1 is exciting.  Sportiva answered Dyanfit's TLT 5 and the demand for a ski boot with racing roots with its Spitfire.  Its soon-to-come Cyborg will provide even yet another alternative.

The trickle down (or is it up?) effect of rando racing boots has not ended.  Sportiva is successfully implementing the best characteristics of the race-bred boots into bigger boots like the Spectre -- a walkable, skiable, and amazingly light four buckle boot.  No one so far as I know has an answer to that.  Yet.