I Am a Human Petri Dish

For the last three weeks, I've been walking a fine line. Kind of like, I've been on an old rickety bus, hanging on for dear life, and hoping the wheels would stay on -- just so I could make it around the bend. Three weeks ago, while in Canada, I caught a cold, which turned into a sinus infection. Just when I thought I had it beat (and therefore went and did some hard workouts), it came back, with a new twist.

Last Tuesday, I woke up, having a plan to drive up to Brighton and do 8 VO2 intervals. VO2 intervals are hard, and mentally, it's hard to get psyched about them, just as it's hard to get psyched about putting a plastic bag over your head and then running up a mountain as fast as you can. I staggered to the bathroom and stood there. I caught a glimpse of myself in the mirror and it was an exact reflection of how I felt: tired, maybe even a bit haggard, eyes a bit sunken in, and not very motivated to do intervals. I stood there a bit longer, torn between the guilt of not wanting to train and wanting to climb back in bed. I walked to the closet to get dressed and picked up some Capilene. Then I walked back to the mirror and stood there again. Then I got back in bed and sent a text to my friends: "My sinus infection is worse. I'm not going out this morning. Sorry." And I went back to sleep.

Thursday (12/23), I was feeling better (although not completely healed) and had one of the best interval sessions of my life -- climbing, at times, at 80 feet per minute, and not feeling all that maxed out. I guess I was well rested. Psyched that I was feeling better, I pushed it hard on Friday (12/24). But after 4000 vertical, I felt something was off and shut it down. Too late though.

By Sunday (12/26), I had caught a new bug, and it was worse than the 3 or 4 bugs I have had in the last three weeks. I only know that because I have been knocked out, laid out, and feeling sorry for myself since then. It's been the full meal deal with aches, congestion, cough, etc.

And so, the wheels on the bus have officially fallen off. They rolled on down the road, and I'm left sitting here laying on my couch writing a blog about it.

Training is all about stretching the body's limits, forcing it to compensate and adjust. But when you stretch too much, like anything, the body will snap, and rebel, and get sick a lot. In hindsight, I should have taken a long rest after Canada and fully recuperated. Instead, being a bit too greedy and too obsessive, I thought I could push it and train through the sickness, and then get recuperated in the weeks leading up to the big race. And in doing so, I became a very effective human petri dish.
Posted by Jared at 4:32 PM 7 comments:

After feeling awesome in Canada a couple weeks ago, I caught a nasty cold that put my training on hold for a week. This week, I felt progressively better, albeit a bit tired. I still have something funky going on in the sinuses, but I think I'm getting closer to being healthy again.

With Nationals coming soon, I'm focusing on threshold type efforts and muscular endurance. With a pretty tough work week, I was able to squeeze in about 10 hrs of training and 17,300 vertical. Here is a summary of my efforts: 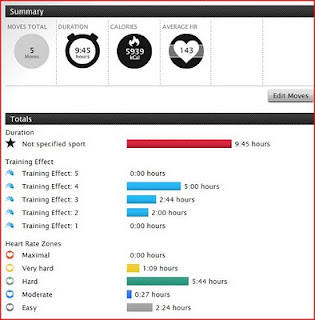 Today, Jon, Tim, Jason, Andy, Graham, Bart, and I had a little "Fun Rando" gathering in Little Cottonwood. We set a 1000 vertical foot course up with a mini-booter, and ran 4 laps. The first one was breaking trail in a blizzard. After that, the weather cleared a bit, and we were able to burn 3 laps, giving us 3 solid 15 minute threshold efforts.

Here is the time/altitude graph: 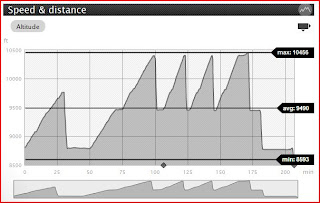 And my corresponding HR: 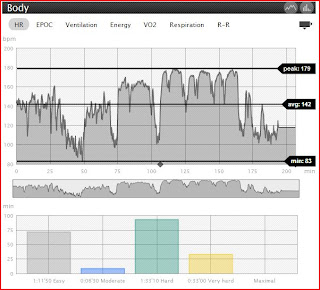 One more week of hard training, and then I'm going to start tapering down.
Posted by Jared at 9:53 PM 2 comments:

I've had a man-crush on Greg Hill for a long time. Greg might take a bit of flak for being a self-promoter, but his publicized adventures have been a source of inspiration for me. Thanks. For that reason, I was excited to ski at Rogers Pass -- an area that Greg frequents -- and to get a glimpse of the mountains and skiing possibilities in that area.

Monday at the Pass greeted us with bluebird skies. Reiner Thoni of Revelstoke and the winner of the 2010 Selkirk Classic, joined a Salt Lake motley crew of me, the Dorais bros., and Bart (the token white guy), along with a Jackson trio of Cary Smith, Zahan, and Nate Brown.


Most of the crew skinning up a ridge to 8812 Bowl (the massive pyramid peak in the background is Sir Donald and hasn't been skied):

Nate Brown bringing some "style" to the backcountry with jewel-studded shades and a bit of skin:


We spent the first few hours and 6k of the day skiing Video Peak and the 8812 Bowl, both popular runs at Rogers Pass. From the tops of these runs, we saw lot of mountains, glaciers, and ski potential. Unless skiing and adventure got old, that area of the world could hold a person's attention for a long long time.


And a view of both from Mt. Cheops:


At the bottom of 8812, we said goodbye to the Jackson Trio who had to go home, and headed up to Balu Pass and Mt. Cheops.  One of the striking features of the mountains at Rogers Pass is the relief.  As a point of reference, SLC sits at around 4500 feet.  So does Rogers Pass.  Here is Cheops:


We tagged the Cheops summit, skied down to the shoulder, and entered into a couple of chutes.

The one that I chose, with Bart's assurance that it "went," cliffed out. We booted back out and skied a nice run down to the valley to meet our other compadres. From there, we skinned up and went back up to Balu Pass, trying to squeeze out 1500 vertical to make it a 10k day. We got about 1350 feet, and that was more than good enough. Celebration - 9850 vertical feet, some classic Rogers Pass runs, and getting dark fast:

Andy, Bart, Jason, and I traveled north, far north, to attend the Selkirk Classic, a race put on by Golden Alpine Holidays.  We got ourselves to the town of Golden, British Columbia and then GAH flew us to the Meadow Hut in the Esplanades where the race was held.  The view on the flight in was astounding:


The expanse of the Canadian Rockies makes the Wasatch, well,a bit small.


We arrived at the Meadows Hut on Saturday and GAH guide -- "Russ" -- gave us a nice preview of the race course, and more importantly, the Esplanades.


Although the high pressure created an inversion and overcast skies in the valleys (which sit at about 2000 feet), above the inversion, the weather was perfect and afforded us 360 views of the Selkirks.


On Sunday, for the race, we had great weather again. Because of the logistical issues, the race was capped at 14 racers. Several racers from the US were able to attend as well as racers from the Canadian National Team. At 9:00 am, we lined up in our skinny suits, and we were off. Unfortunately, because I was frothing at the mouth and staring at a skin track, I have no pictures.

On the first climb, a group of five or so got off the front and summited about the same time. Me and the BG were in that group. Unfortunately, several in that group crashed on the bony first descent, giving me and Reiner a slight gap. At the transition at the bottom of the first descent, Reiner got out first, and held the lead until the end.

I was happy with the way my race went. The pressure was on the whole time, and I feel like my training this summer and fall is kicking in.

More than anything, it was fun racing in a new and unique venue. The course was very "Euro" in that it was 100 percent in the backcountry with some fun skinning. We were all very impressed with GAH and their hospitality, and as you can see above, the terrain blew us away. Future home of a North American Pierra Menta?
Posted by Jared at 9:56 PM 4 comments: