3 feet of powder? Canyon is closed? What? Boo... I'm going to walk a few miles up Little Cottonwood Canyon and ski some ice.


And forced to ski some pow.


Bart "skiing" pitch 2.  For the record, I "ski-rapped" this pitch because I thought it would be fun to keep my skis on the whole time.  I don't see "ski-rapping" making any sort of a popularity surge in the near future.

We both were silent.  The Teepee pillar loomed above us.  And even bigger than that loomed the Grand Teton.  We were sitting at 12,200 feet.  My skis were stuck into the snow vibrating, chattering together in the wind.  The base of the Stettner was a stone's throw away, but it looked dangerous.  . . . More at the Whiteroom.

With the nice weather window we've had, I was anxious to link up some peaks and good ski lines. Jason Dorais and Adam OK, both who are practitioners of the Go Light Go Far discipline, joined me for the action. Our plan for the day to climb Lone Peak via Bells and ski the Northeast chute and eventually end up at the Coalpit, where we dropped a car.  Our approach from LCC road to the base of Lone Peak took about 2 hours. Here is Jason with Lone Peak in his sights:


There are easier ways to approach and climb Lone Peak, but I've always been intrigued with climbing the chute to the distinctive notch on far looker's right in the photo below (what I call the "Notch Couloir"). From below, the ridge from Notch Couloir looks like a fairly direct and skinnable line to the summit.


For me, Lone Peak is the grandest in the Wasatch.  I've nearly driven off the road (a few times) as I've stared at it from the valley.  Hence, yet another view.


I thought that climbing the Notch Couloir would give us a good sense of the NE Couloir's conditions, and it did.  The bottom half was filled with decent compacted snow.  The top half was a slick ice sheet that had expelled the month's snow onto the bottom half.  Ever optimistic, we climbed the ice crusted chute to the top and then got scared and schooled by the exposure and the rock moves required to get up the notch. Here is Adam topping out:


And Jason standing on top of a big cliff above Big Willow:


The headwall at the top of the Notch contained some softer windblown, which we skied. It was steep! As I booted down the icy section, I knew that we wouldn't be skiing the  NE Couloir today.  The apron was nice though.


Having just been kicked off Lone Peak, and having a lot more daylight left, we struck out for South Thunder. Here is  a shot of its northeast aspect.


From there, we traversed the top of S Thunder Bowl and to the rim of N Thunder Bowl, and dropped in.


We crossed N Thunder Bowl, and then took the non-direct, dumb, sugary, steep route to the top of North Thunder. The crux involved a belly crawl, a bush, and Whippet aid.


I put crampons on to traverse the icy rocky ridge towards the Coalpit entrance, and we found ourselves looking down the Dresden Face.


The Dresden Face is pictured below.  The photo is Adam's, taken from his blog TetonsandWasatch.com. 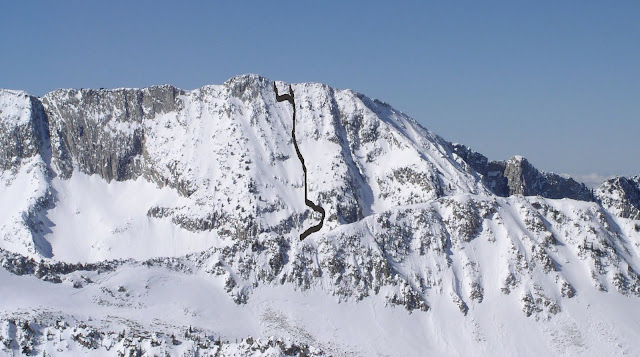 For Jason and I, the line was nice and soft.  Apparently, for Adam (he dropped in lookers left, depicted above), not so much.  FYI, there are two cliff bands on the face that I don't consider skiable.  With the icy conditions, we used extra caution as we approached them, and were able to skirt both of them without much problem.

At the bottom of Hogum, we said goodbye to Adam, and Jason and I began the climb to Coalpit.  Jason and I ran out of water before we descended the face, which was about 2:30 or so.  I sucked on snow and ice chunks to try to get by, but it was a thirsty climb to the top of the Coalpit. Fortunately for us, there was a nice skinner and booter in.


Jason on top of Coalpit with 9900 vertical in his legs and about to ski a long long line.

The Speed Board: Y Couloir

After Skimo Nationals, I kind of lost some motivation to train.  In the battle between me (who was in favor of training) and myself (who was not), I thought that one way to make training a little more interesting would be to do speed runs at some of the more popular lines in the Wasatch.  And because want to promote speed ascents/traverses and the like (and because I'm vain), I thought I would create the "Speed Board."

A couple weeks ago, I made a speed run at the Pfeif, but I lost visibility and bailed on the knife edge ridge leading up to it.  Today, I made a run at the Y Couloir.  I had planned to do some boring intervals at the resort, but Chad convinced me to join him in the Y, AND he offered to get there early to break trail for me!  How could anyone pass that up?
For a solid 2300 feet, I was able to follow a nice booter put in by Chad and a couple other dudes.  After that, Chad and I traded pulls, but it was slower going, especially towards the top where there was a nice bloody-shin crust on top of some bothersome sugar.


In 4WD mode -- Whippets and boots churning -- my hands got really cold, which is why I am making this face:


Anyway, here are the stats:

1:18:25 from car to top. Trail was broken for a good portion of the way, with some rough trail breaking at the end. I think it could be done in under an hour if there is a good booter in, like there is now. Go for it!

1:38 car to car*. *Paused the stopwatch at the top for a bit of socializing with Chad.

I've started contributing to La Sportiva's Whiteroom, a blog dedicated to backcountry skiing and ski mountaineering.  I just posted a trip report from a recent outing in the Triangle Couloir.  You can check it out here.

I was rummaging in my basement and found these: Voile Snakeskins.


What are they? That's a good question. They were touted as climbing "skins," but they didn't work so well. I bought my first pair over 15 years ago because I didn't want to spend money on mohair. Mohair works much better than slick siped plastic.

I also found these:


What are they? Another good question. They are first generation heel risers to make skinning uphill a bit easier. Before climbing bars were integrated into bindings, we strapped sawed off PVC pipe on our leather boots to serve that purpose. The purple ones pictured above are the manufactured kind. They dangled around your ankles when you skied and skinned. And when you hit an incline, you strapped them under your foot. They worked about 25 percent of the time.

Evolution of backcountry ski gear in the last 15 years is impressive. In this time period, I have gone from three pins and leather to Chouinard cables to various telemark bindings (Rivas, Superloops, Hammerheads) to Dynafits and beyond :).

Fifteen years ago, the gear choice for hardcore ski mountaineers was severely limited -- practically non-existent. Descents of high mountain peaks with a free heel was tantamount to suicide. Although I'm sure there were some who attempted and succeeded on this kind of gear, most of the hardcore descents were probably being done on full alpine gear. For example, Johnstone and M. Newcomb's first descent of the Hossack MacGowan couloir on the Grand Teton was done on full alpine gear. That meant that they had to carry at least 20, and probably close to 30, pounds of skis and boots on their back! That doesn't include their other mountaineering gear. Any person capable of that deserves a lot of respect.

Today, backcountry gear has evolved to a point where it is essentially ski mountaineering gear, and very useful. Anyone can have a fully capable ski mountaineering setup that weighs 10 pounds, or even less. You can skin on this gear and climb on this gear, options some of the early ski mountaineering pioneers never had. This gear with the right pilot can handle the toughest of ski lines. With these huge advancements in gear, it stands to reason that today in 2011, much more is possible.
Posted by Jared at 8:18 PM 2 comments: