Check out this seminar. November 3, 2012. Cost is only $26. Seems like it would be really interesting and entertaining. Register here. 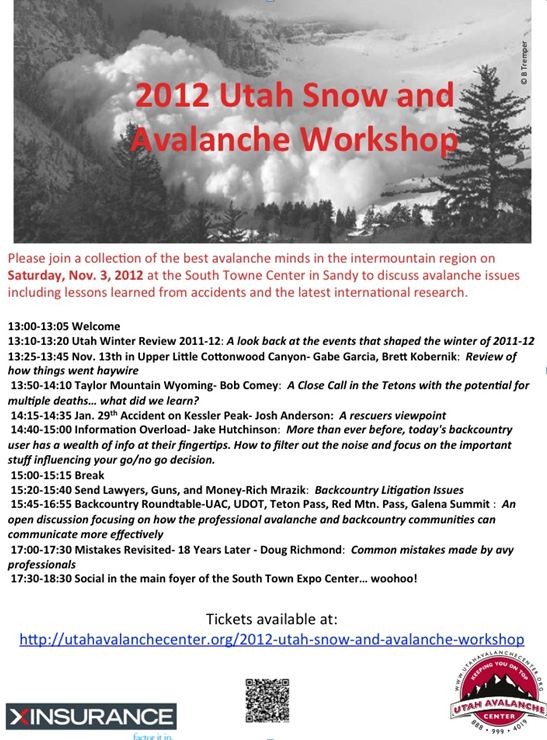 Mostly recovered from the St. George Marathon, I transitioned into skimo training this week.  There isn't any snow, so I started out by trying to classic roller ski.  I can't classic roller ski in a straight line, so I skated on classic skis, kind of.  When I got home, I went on to YouTube to see if it really is possible to classic ski on roller skis.  Apparently it is.  Apparently I need a lesson and lots of practice.

I think the best dryland training for skimo at this time of the year is hill walking.  One of the best hills around is Grandeur Peak.  It's a big bang for your buck in that it gives you 3400 vertical.  I went up Grandeur 3 times this week:

Mon:  52 minutes to the top; 1:16 car to car at a subthreshold pace, edging into threshold the last 10-15 minutes on the uphill.  Controlled running down until last 1/2 mile, and then crazy arms and crazy legs.

Wed: 54? minutes to the top with JD and Tom D; 1:20 car to car at an endurance to subthreshold pace.  Controlled running on the DH.

Fri: 48:50 to the top: 1:12 car to car at threshold pace.  Controlled running until the last mile.  Ran into JD and Andy on the way up, but only stopped for a few seconds to tell them that I wasn't going to stop.

In addition to the above, I worked in a 6 mile flat run on Tues. I barely made it home due to calf tightness from the marathon.  On Friday, with the kids out of school, my family went to Snowbird, rode the Tram up, and spontaneously decided to walk down.  3000 vert. and 3 hrs later, we made it back to our car.  It turns out that Ergo Baby carries 7 yr old girls, 3 yr old boys, and 1 yr old boys in a pinch (separately of course).

On Saturday, I had a fun outing with my brothers Aaron and Sam, Uncle Roman, and the Dorais bros.  We climbed the West Slabs, traversed to the North Summit of Olympus, and exited at the Wasatch TH.  Other than the celebration that included popping and sharing a single Rockstar (diet) followed by a topless flex-off on Olympus' Summit, the highlight was the charge down the mountain.  We went controlled for the first mile and a half.  Then, competition overcame us and before we knew it we were charging down Olympus.  Let's just say that there was lots of free riding and straight-lining going on.

Autumn Run in the Wasatch

First off, thanks to Chad for his Local Heroes write up, featuring . . . me.

With the marathon over, I was anxious to get up a route I'd been thinking about for awhile -- the "Granite Halfpipe" (don't know if it really has a name; that's just what I call it).  I met Jason at 6:30 AM at the 7-11, but we weren't that psyched.  It was lightly sprinkling.  Rain was in the forecast.  Thinking we would just go until it sucked, we left a car at the BCC park n ride and drove up LCC to the Granite Halfpipe.  Of course, once we scrambled a ways up, we realized that we were somewhat committed.  Going down, dry or wet, would be somewhat of a challenge.  So, we went up.  And eventually ended up on top of the west summit of Twin Peaks.  From there, went to the east summit, descended Broads Fork, and got to the BCC road just as it started raining in earnest.  Some days you win, others you lose.  In addition to getting a weather break, we caught a ride down BCC on our first try and made it to where we needed to be by 11:30.  Today, we definitely won.

I took some pictures with my S90 that is on the fritz.  I dropped it into a lake in Colorado this summer, but after I dried it, it's still going, kind of.  Pictures below are heavily doctored, but still depict an autumn Wasatch.

Yesterday, I ran my second marathon -- the St. George Marathon. I'm a year older, have a few more running miles in my legs, and on top of that, I seriously trained on the road for 6 weeks. In those 6 weeks, I mostly did endurance training with a bit of "speedwork" mixed in. This was essentially what I did:

Week 6 -- About 50 miles. Mostly easy. This included a 20 mile run from Mountain Dell Golf Course down Emmigration Canyon to my house.

Week 5 -- About 45 miles. Half easy, half hard. This included the Mid-Mountain marathon (only 25 miles and on the dirt -- don't count it as a real marathon), which I did in 3:17ish. I was happy about this effort, particularly about the fact that I made it the full distance without having to stop due to cramps, injury, fatigue, mental breakdown, etc. This gave me hope that I could break 3 hrs in a road marathon.

Week 4 -- About 40 miles. Mostly easy. This included a hike-o-run up the Grand Teton.

Week 3 -- About 40 miles. Mostly easy. This included a repeat of my Mountain Dell to home run. However, I lost lots of confidence after this run. After about 12 miles, my legs and ankle hurt. I had to walk and jog most of the way home. Part of this was due to the fact that I was trying some new, lighter shoes. Another part was due to the fact that by this time, my body was having a tough time absorbing the miles of the previous weeks.

Week 2 -- About 20 miles. Three quarter easy, half hard. I ran a 5k (hills and headwind) and was 17:40ish. Ran the first mile in 5:20, after which my face and arms went numb. Then I just survived the last two miles. I also ran 4 x 400 at the track for the first time. I won't disclose my time because it is embarrassing. I never guessed that 400 measly meters could be so hard. Respect.

Week 1 -- About 45 miles, including the marathon. Made the mistake of going up Grandeur with Jason and then running down the day after the 5k and struggled to get my legs feeling better before the marathon. For the most part, they felt ok, but there was soreness even before I started.

The marathon was pretty fun. It was fun in large part because I didn't know what to expect. There came a time in bike racing and ski racing when I could pretty much predict what would happen. Given my inexperience road running and marathon-ing, I had no clue. That's what made it interesting.

As usual (for me), I started too fast. I went 5:47 the first mile, and by mile 7, my average pace was 6:05. That made me nervous, but I put "feeling" over reason, and just went with it. By Mile 12, my hip (that got injured in the avalanche) started hurting, and I ate 2 ibuprofen pills. That was a mistake, because at Mile 13, I started heaving and throwing up. I stopped twice briefly to put my hands on my knees and heave, but since Mile 13 is lined with lots of crowds, I was spurred on to keep moving. That was definitely the low point for me in the race. I was weaving and heaving. I got a bit scared that my marathon goal was in jeopardy, but again, going by "feeling," just did the best I could. When I saw that my Mile 13 split was 6:28 and half marathon split was a bit under 1:24, I realized that the damage wasn't too bad and that I was still on track.

Through Mile 20, my overall average pace stayed at 6:26, and then at Mile 21, I did a 6:06 mile bringing it down to 6:25. When I hit mile 24, I knew that I would probably get my goal of 2:50. Still, running 2 6:30s on the flat was really hard, like really really hard. A lot of this was due to fatigue, but I will remember that feeling of difficulty for a while. I like keeping a mental file of moments of pain like that. It keeps me alive, happy, and sane.

I crossed the line at 2:48:43. I was proud of that. And even though I can scarcely walk today, I'm quite happy with that time. A part of my satisfaction arises from the fact that 6 months ago after I got caught in an avalanche, I didn't think that I would be able to manage a marathon. The body is an amazing thing.