Each year the rando racing scene grows.  Crucial to that growth are local races.  I keep promising to grow the local scene, and I will once I shift my effort and focus from training to promoting races.  Until then, I am grateful for promoters who put on rando races nearby.  Equally crucial is participation.  I know that there are a lot fit ski tourers out there.  You should try rando racing.  Here are some that you should try to attend. 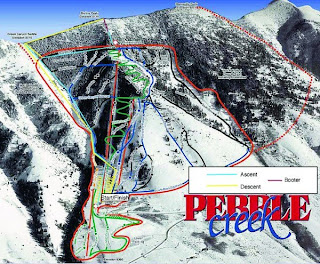 
The Pebble Creek Randonee Race is February 28th at 8:00 am. The straight lines will mostly be switchbacks so the course is longer than it looks with a roughly 3000 ft ascent/descent. There will also be a rec division which is basically the same route as the race in years past with about 1800' feet of climbing. Please direct any questions to the ISU Outdoor Adventure Center at 282-3912 or to slukenelson@gmail.com. 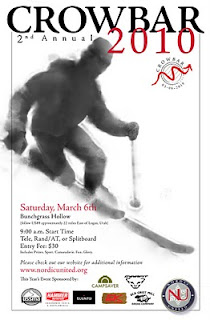 Note: this is not an adventure race. Not multisport, only AT, Tele, split board.

This is the classic.  One of the longest running and best races around.  For two years, it was a World Cup event attended by the best racers in the world.  This year's race will be run at Brighton.  Check it out here:  http://www.wasatchpowderkeg.com/
Posted by Jared at 2:08 PM 1 comment:

We got out for a tour this morning. The forecast said that there was was an 80 percent chance of snow. And we expected it since it seems we are always stumbling around in low visibility wet conditions these days. BUT, we received a pleasant surprise. Bluebird skies! Our route took us up Grizzly Gulch, into the East bowl of Silver Fork, up back to Davenport, back down a north facing run into Silver Fork, up the West bowl of Silver Fork, into Days via a north facing chute, up out of Days, down Holy Toledo, up to Cardiff ridge, and out via a Cardiff chutelet. Every run was a quality Wasatch run. 4 hrs. 5400 vertical. Great weather. Great snow. Nice tour. Here are some pics. Here are some pics.

Sam with Little Cottonwood in the background.

Alex and Bart topping out on Silver Fork because the cardinal rule is: "we ski from the top."

Where'd you get those shades? Bart before heading up the West bowl of Silver.

There is a nice happy cornice minding its own business.

Hmm, what are those guys doing?

Hacking on the happy little cornice.

Happy cornice is now an angry, rather large cornice . . . bounding down a chute. Notice the crack in the new snow.

Cornice is growing angrier by the minute (bottom right). And it took a little soft slab with it.

Close up of the slab.

Apollo dropping in, avoiding the holes left by the cornice.

Sam launching off a ridge (center).

On top of Cardiff, getting ready for a home run into Alta.

The weather started acting up, shutting down the visibility. We're used to that though. Sam, dropping in.

And into the abyss.

Last night as I got in the car, soaking wet, just having spent the afternoon climbing and skiing 5600 vertical in dumping snow, I turned to Bart and said, "well, that's all I can do." He said, "yep, that's it; that's what you are." And that concluded a two week build period during which I put in about 36 hrs and 47k vertical.  Between now and the end of February when I go to Andorra, I will taper down so I can be all I can be at Worlds.


This season is the first season I have prepared (and I use that term loosely) and followed a structured training plan for skimo racing. Thanks to my world class endurance think tank, I have put together a structure that has been beneficial and has led to some improvement. My think tank and mentors include Bart "Apollo Creed" Gillespie, Billy "Olympic Gold Medalist" Demong (I see into the future -- trust me), and Bad A$$ Brian Harder. These guys are great athletes and more importantly have a good understanding of endurance training. They have reduced my learning curve dramatically.
Since skimo racing is a newer sport and a fringe sport, there really isn't a lot of written discussion on how to train. A lot is unknown and a lot of voodoo is required.  But given the demands of a skimo race,  for the most part, basic principles of endurance training apply.  Here are a few of my thoughts and theories on how to train for skimo racing.
These principles may seem pretty basic to those of you who compete.  Of course, understanding them in theory and actually applying them in training are two different things.  I have found it difficult to apply and to trust them.  For Type A, obsessive-compulsive, psychopathic, masochistic, over-achievers (like most of you) it's hard to force yourself to take it easy.  It's hard to force yourself to cut your interval session short if you are not recovered.  There is a tendency to go as hard as you can as much as you can.  In the end, as Billy told me a few days ago before he left for Vancouver, "you have to learn to trust yourself; you have to trust your training."  That trust component may be the secret of his success.
In conclusion, I think a weekly training plan for the weekend warrior should look something like this:
Monday - rest
Tuesday - 1-2 hrs, intensity
Wednesday - 1-2 hrs, endurance/recovery
Thursday - 1-2 hrs, intensity
Friday - rest or endurance/recovery
Saturday/Sunday - 8 hrs mixed endurance and intensity or race
Posted by Jared at 8:55 PM 3 comments:


Little Pine had heated and slid (probably on Thursday) and at the bottom we met a frozen debris pile. Questions were raised as to whether we were making the most of our time, but for whatever reason, we kept getting drawn further into the chute. "Let's just go up to the rock and see if it gets better above." After getting to the rock, our conversation turned to, "Well, we've come up this far, we may as well just go to the top." Here we are going to the top.


The conditions in the chute weren't optimal. Once we got above the death balls, we encountered variable snow conditions ranging from bullet proof ice to breakable crust to a nice 6 inch layer of graupel (little styrofoam ball-like snow). It was a constant debate as to whether to boot or skin. We did both. Suffice it to say that the chute was a time eater. It took us a little over 2 hours to climb the 3000 ft to the top.

The descent was fun. There was some decent snow at the top and then it progressively more "interesting" as we descended. Here's Sam showing some good technique.


The bottom shot looks like good pow. Really, Sam is surfing a graupel loose snow wave, not that there's anything wrong with that.


By the time we hit the death ball section, it was truly fascinating. Death balls are frozen snowballs that range from the size of a softball to the size of a soccer ball. They form when wet snow slide and rolls into a ball. They freeze and their life's purpose is accomplished if they can trip a descending skier and pitch him headlong down a 42 degree chute. With the right technique -- keep skis close together, stay on top of ski and apply relatively equal pressure to each ski on the turn -- you can blast through death balls, some of the time. It also helps to have one of those mouth protector thingys that football players use.

Here' a shot of Sam working the bottom, half-pipe style.


And here are expressions of the crew after skiing 3000 feet of character building snow:


As I mentioned above, the day started out with an emphasis on training, but that degraded quickly as we had to deal Little Pine. We had hoped to get in 10k vertical, but as we sat at the White Pine parking lot, it was 11:30, we had been out 3.5 hrs, and we had only 3k under our belts. I had to be back to the car by 2:30, and it was unlikely that we'd be able to pop out 7k in 3 hrs. Aiming to do our best, we headed the slope opposite of Little Pine -- Scotties. We climbed Scotties into No Name, followed the ridge above Snowbird and Gad 2 and then dropped west down through the Birthday chute area and into White Pine. Sam dropped back out of Scotties to make it to Provo by 2:00. Sorry, no pictures.

We then skinned up and drilled it to the top of Red Baldy. I didn't want to drill it, but had no choice because Alex went to the front and well, drilled it. We climbed 1800 feet in just over 1/2 hour and topped out at 11,000 feet on Red Baldy.


Our descent of Red Baldy was the best of the day. A long powder line. And we would have made it to the car by 2:30, except that we took a slight detour to climb a ridge to drop into Scotties, a more direct and powedery route to our cars. We made it back to the cars by 3:00 and had 8600 for the day. Fun tour. Good training.
Posted by Jared at 7:08 PM No comments: 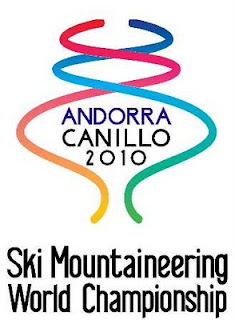 So it looks like I'm going to Andorra to the World Ski Mountaineering Championships. Unfortunately, one of the qualifying members of the US Ski Mountaineering Team is unable to go. Fortunately for me, I am the first alternate, and I get the slot and a shot. Of course, I will do all I can to do my part, but am a bit nervous about measuring up. I suppose I could look at it this way: I will be the fastest Japanese-Chinese-American in Andorra. Very happy to go. 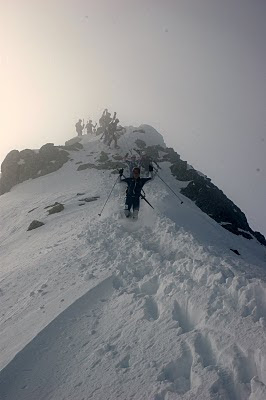