Mt. Baker: Up the North Ridge, Down the CD Route

On Memorial Day, Brother Aaron and I set out to climb and ski Mt. Baker.  We woke up to rain.  We drove up Glacier Creek road in the rain, and when we hit snow about 2 miles from the trailhead at about 3000 feet, we started hiking and then skinning . . . in the rain.  Although we dared not discuss it, the question that filled our minds was, "why are we climbing a volcano, blind, in the rain?"  But we only had one day, and we climbed with a hope and a prayer that the skies would clear.  And guess what?  By the time we hit 7000 feet, the clouds and mist began to lift!  For a while anyway.

As the skies cleared, we could see that we were just above the Coleman Glacier with its bergschrund (I've always wanted to be able to use that word, yessss.) less than 100 yards below us.  Getting to the North Ridge requires a crossing of sorts across the Coleman Glacier.  Toward s the top of the glacier, it seemed pretty filled in.  Even so, because what lay beneath was a bit unnerving, Aaron and I roped up and did our best to be safe.  Aaron boot belayed me over this crevasse. 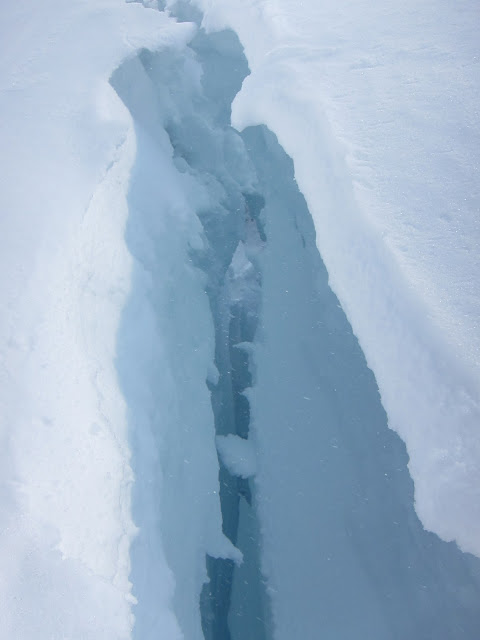 As we crossed, clouds rolled in and out, sometimes killing our visibility.  I couldn't shake that nagging concern of whether we should pull the plug.  But the drive to get on the North Ridge and the fear of re-crossing the glacier in low/no vis conditions prevailed.

The north face of Baker was impressive.  The lower face was littered with ice fall debris, and higher hung huge seracs.  I'd heard that the Coleman Headwall, which is on Baker's north face, was a worthy ski descent, but from where we were, it looked more than daunting.

Once across the Coleman Glacier, we front pointed up about 1000 feet of 60 degree hard snow, and soon the notorious "ice cliff" came into view.  I wondered whether we ought to approach via climber's right or left, and eventually opted for left.

Climbing the ice cliff was really cool.  The ice was blue and very hard and brittle.  I was glad that I had some vertical point crampons.  We had 8 ice screws and each of us had 2 tools.  We climbed on one 8.2 mm half rope.  Aaron dodged dinner plates, and I climbed first.  The first 20 meters or so up the cliff were the and once over the cliff, the pitch mellowed out.  The first pitch measured 59.8 meters.  As we climbed, the clouds rolled in again, and the low/no vis significantly bumped up the adventure rating.

Once above the ice obstacles, between us and the summit was another long pitch of steep hard snow.  To the left and right of us were large hanging seracs.  Soon, the clouds lifted and we could see the summit above us; below us, we had a great view of the Roosevelt and Coleman Glaciers.  As we neared the top, we were blasted with a cold wind.  Aaron was happy. 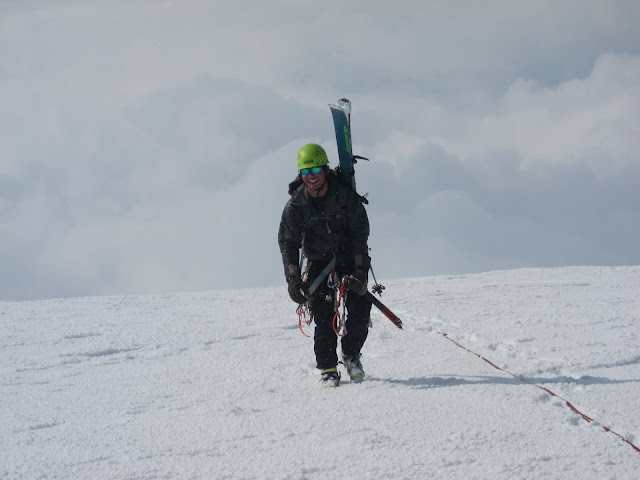 Fortunately for us, there were ski tracks down the Coleman-Deming route, which we followed.  The descent was relatively casual.  And lucky for us, the exit was perfect.  We were able to descend a solid 7,600 feet without having to hike, skin, or pole.