The wife and kids are out of town, so I am alone. And so I get to indulge. And yield to supressed cravings, i.e. ride bikes a lot. And by riding bikes a lot, I don't mean doing structured interval training. I have this nagging feeling that I should be doing some hard structured intervals. As I helplessly watched the peloton roll away in the Uintas a couple weekends ago, I solemnly swore that I would be doing 2x20 threshold intervals yesterday, and today for that matter, and for the rest of the summer. Rather than doing dumb intervals though, I did what I felt like doing: ride on the dirt in the mountains.

Yesterday I rode for 5+ hours in Park City. I started in town and rode up Skid Row to Lost Prospector to Solamere to Deer Crest to Deer Valley to Mid-Mountain and eventually exited at the Canyons. I saw 6 people. I punched it up the climbs a few times, hoping that by doing so I would somehow get the benefit of doing intervals. I'm not sure whether my legs benefited, but I surely was happier. Fruits of indulgement.

Today I was planning on taking it easy and then hitting the RMR, because doing so would, in theory, make me a faster racer. But then Eric and I got talking and before I knew it I had talked him out of a 4 hr ride to Ogden in Zone 2, and into a "Zone 2 mountain bike ride" -- whatever that is. I think he felt like he was caving a bit, and therefore indulging. But I suspect his guilt wore off as we began riding into the cool recesses of Millcreek Canyon. Mine did. Eventually, we hopped on the Pipeline, rode to the Big Water trailhead, and up Big Water to Dog Lake. But that's where the indulgement ended. Eric wanted to get some "road miles" in, and rather than riding to the Crest, we exited out to the Big Cottonwood Canyon road, rode up to Solitude, and eventually home. It was a good choice, because we were both low on food and I would have bonked for sure. Perhaps the hardest part of the ride was not stopping at the Silver Fork Lodge for a full meal. I should have in the spirit of indulgment, but I didn't.

Note: I'm messed up. I get that it is indulgement to be able to go biking while the family is gone. But why should I consider it indulgement to go mountain biking rather than doing intervals? The Samurai is suppressed. Or is it repressed?
Posted by Jared at 10:20 PM 5 comments:

I spent the better part of this week in Sanpete for work and a wedding. Ethan, Land, and I were riding motos and looking for lizards. 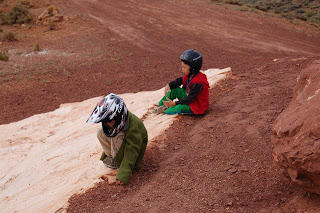 Instead we found a big old rattlesnake. I stepped over a large rock and almost onto this guy. 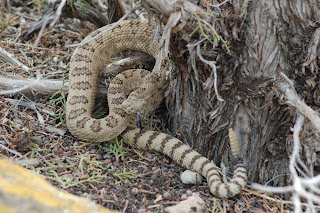 Training-wise, things are starting to come together. I'm beginning to feel more and more like a biker. I haven't had lots of time, but have managed to get some intensity in everyday this week. Mostly on the mtb. Thursday, I got some high altitude training in. There are a lot of motorcycle and ATV trails that work well as MTB trails. This is at about 9800 ft. 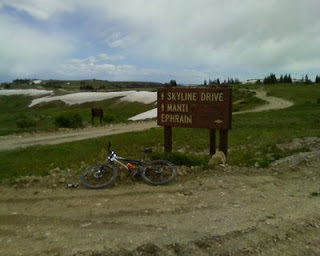 Back in the Saddle

My biking efforts this year gave way to my skiing efforts. But the time has come, and I think I'm ready to start spinning pedals in earnest. Given a choice, I think I would prefer to . . . I guess I better not go there.

Last year, I had several races under my spandex by this time of year. This year, I've done a couple RMRs and a couple DMVs and, as evidenced below, a mountain bike race. I flatted out of a DMV and the mtb race. 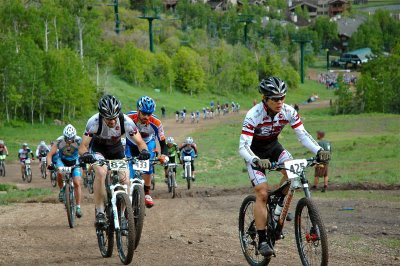 No road races yet. But, I just registered for the High Uintas Classic, a stage race no less. I debated registering for the Masters 35 division, which I qualify for as of this year, but that depressed me because I have always looked up to those guys . . . as being old. I also debated registering for the one-day only race because staying in Evanston is not exactly a vacation destinaion, but I really really like the Evanston downtown crit. I think I'll still sleep in my own bed, and if my allergies don't get the best of me, I'll plan on being at the crit. I should see if my TT bike still exists.

I figure if I'm going to ever jump in to the bike mix, I'd better do it soon and better do it head first. I really really hope that I don't suck too much.
Posted by Jared at 4:56 PM 3 comments: