Molas Pass to Durango on the Colorado Trail

A couple weeks ago, Bart and I rode the Colorado Trail from Molas Pass to Durango.  Wow.  It was definitely the coolest bike ride I've done.  It was the full meal deal.  Tight single track. Sprawling and amazing vistas. High elevation.  Rain.  Hail.  Hike-a-bike.  12,000 foot plus mountain passes.  80 miles.  13,000 feet of climbing.  Over 18,000 feet of descent. And to make it epic-er, 25+ miles in the dark with a couple headlamps not meant for biking.

Since I hadn't broken 80 miles on a bike this year, I approached the ride with a bit of trepidation.  But it's something I've always wanted to do, I had a willing partner who is OK on a MTB, and we were in the area, . . . . wait, my bike had just been broken to bits by a Ford F250.  Bart wouldn't let me back out, so he adjusted Rosie's (his wife) bike so that I could ride it.  It turns out that a Scalpel 29er makes a Scalpel 26er feel like a crash machine.  I'm pretty sure that had I been on my Scalpel 26er, I would have crashed 10x more than I actually did (I went over the bars once at about 11:30 pm).

Because we had to break camp and get our families on their way to Durango, we didn't get an early start.  6:30 would have been ideal.  Instead it was more like 11ish.  But we weren't too concerned.  We conservatively projected an 8 to 10 hr finish.  At about 8 to 10 hrs into the ride we still had at least 40 miles to go.  We came to a point where we could bail, but we just rode past it.  The trail was a lot more technical and challenging than I expected.  And the darkness made it even tougher.  Fortunately, the last 25 miles of the ride dropped 6000 feet.  We finished in just under 14 hrs total.  It was after midnight.

One thing I've enjoyed in the past is driving backcountry roads and exploring new trails.  Before I had kids, I was a fly fishing guide in the Frank Church Wilderness in Idaho.  I spent lots of days driving around the mountains between Cascade, McCall, and Stanley.  It was fun.  And someday soon, I'd like to do the same thing with my family.

For the last few years, I've visited the San Juans each summer in Colorado.  The roads down there are pretty rough and moving the family through those mountains wasn't really doable in our Honda Pilot.  So, with an eye toward more backcountry adventures with the family, I recently bought a 2009 4Runner.  I thought about a Sequoia and a Suburban might have crossed my mind, but for what I've wanted to do, those vehicles are too big.  The problem with the 4Runner was that it didn't have a third row seat, and I need to seat 6 people.  So, after a bit of research and trolling ebay, I found a jump seat, and after some drilling through the bottom of my 4Runner (and narrowly missing the gas tank), I bolted the jump seat in.  Third row seat. 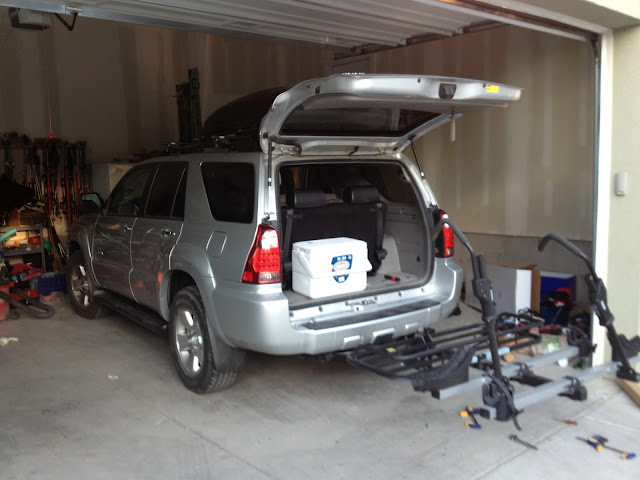 The jump seat took a lot of space, so I modified my Thule T4 bike rack by removing two of the bike holders and bolting on an ATV cargo rack so that I could haul a cooler, an inflatable kayak, and camping gear.  More drilling.  With a Yakima roof box and my modified rack, I was able to carry camping gear and food for six people in a relatively off-road worthy vehicle.  With those gear mods -- drilling into otherwise perfect pieces of equipment -- we set off for the San Juans.

If you happened to notice the blog post below, you might surmise that our adventure through the San Juans was not without difficulty.  I got a flat tire at 12,000 feet, and in my haste to change it (because it was raining and hailing and getting dark), I left my back hatch open. And I lost a handgun out the back hatch.  And some shoes.  Oops.

But before that, because of the rough roads and the decreased departure angle of my T4 rack, which caused my special modified rack to drag on the road, my bike fell off.  And then Bart ran over it with his F250 truck.  He obviously needs to work on his off-roading skills. 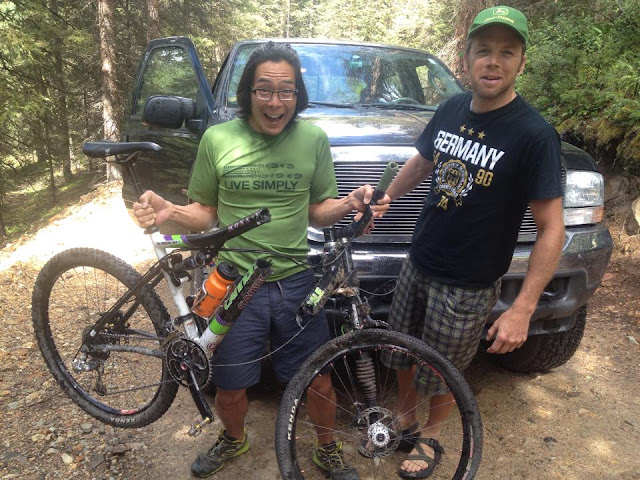 But those slight trials aside, the trip up Corkscrew Gulch, over and down Red Mountain, up and over Hurricane Pass and Cinnamon Pass and then to Animas Forks was worth it.  Such cool country!

Lost the week of August 12, 2013 on the road between Cinnamon Pass and Animas Forks.  Let me know if you find it.  Reward.