Point to Point Course and the TOU

There were several events on Saturday -- the Snowbird Hillclimb/Widowmaker, 1000 Warrior "race," and the 50k Snowbasin MTB race. And of course the Tour of Utah. Still somewhat on the mend, I skipped the competition and went to ride a portion of the Point to Point race. In doing so, I realized that I don't know the Park City trails all that well. Half the trails that I hit, and that are part of the course, I have never ridden. I was impressed particularly with the upper Deer Valley trails. I was tempted to ride into Heber.

I tried to follow the Point to Point directions -- turn here, hard left there, up this, down that, but I couldn't. I kept getting lost. I was about to give up on retracing the course when I ran into none other than the course setter himself: Shannon. And I was treated to a preview of the middle third of the course. I liked it, except for the Johns descent. The Johns descent is twisty and turny and there are lots of trees in the way. I now can empathize with pinballs. My goal for the whole Point to Point: don't crash into trees because it hurts. I predict that squirrly-man Bart will gain 10 minutes on the TG2, Johns 99 and Johns descent. 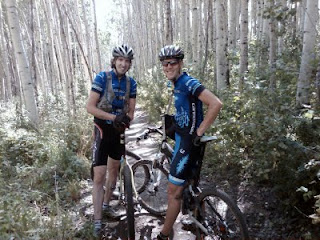 Shannon has put a ton of work and thought into the course. Thanks!

On another note, the Tour of Utah spectating has been fun. Things were pretty rowdy at Tanner Flat. I saw a devil and a Wendy's girl who looked a lot like Art. Several of the riders looked like they could use a push: 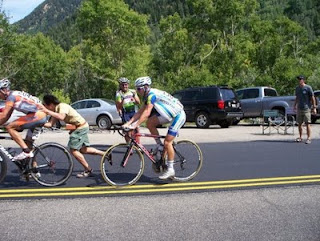 It's been three months since it snowed in the Wasatch. In celebration of a recent dusting, Noah and I set out on a little biking adventure. Noah proposed this route: 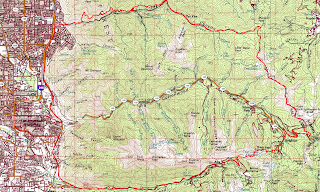 We generally followed the route pictured above, except that rather than riding over Twin Lakes Pass, we rode up to Catherine's Pass and down to Brighton. Here is a photo of Noah climbing Catherine's pass. 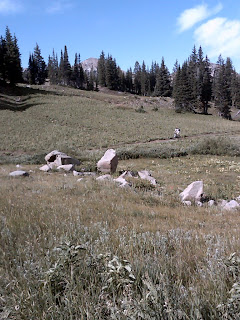 Here is the top of Catherine's pass, looking towards Brighton. While it's a place that both of us frequent in the winter, I hadn't been there in the summer. It's just as spectacular. The ride off the pass into Brighton was exciting. There were a few unrideable spots, but all in all, it was rideable. I got a bit too carried away and hit a granite water bar head on -- my first of a few flats of the day. 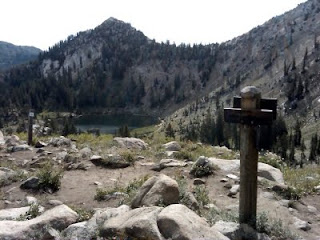 Here is a picture of my favorite view of the Pfeif, a view from the top of Puke Hill. Too bad the picture quality isn't great. 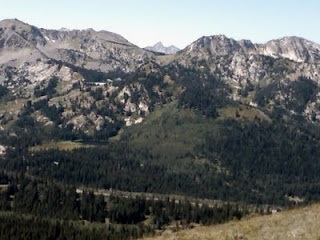 Gotta love the Wasatch. All in all it was a great ride and good times. Noah has been "working" hard all summer and is about to release his new movie "Flakes." Here's the trailer.
Posted by Jared at 11:37 AM 2 comments: 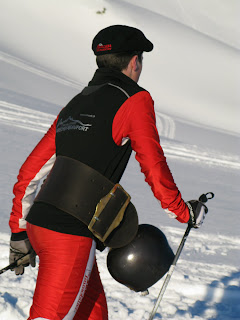 Spectator at the Pierra Menta

"Mom, why is dad talking to the mirror and jumping on the bed with some bells?" 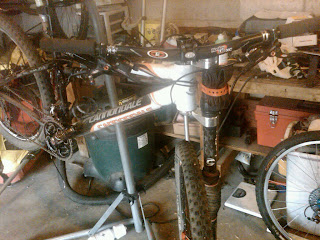 Testing out the post by BlackBerry function. I stayed home from work today because of a lingering cold. Every day I keep thinking it will be better, but it gets worse. I'm starting a course of antibiotics.

Since I'm down and out I spent some time working on the Scalpel. I have to say that I think I have a love affair with this bike. In the last few days I've added a riser bar and switched to a triple. I was ridiculed into getting the riser bar. I showed up for a ride last week with some Ritchey WCS bar ends. Alex called me "Hermida" and Bart called me "old school." I ignored them until I wrapped my bar end around a little tree and ended up with a minor concussion. With the riser bar I think I have a bit more control on the DH and a bit more leverage in the climbs. Combined with the triple, its an adventure riding machine. Hopefully it races well too. If I can get functioning again I'm going to do the Point to Point.

This message was sent using the Picture and Video Messaging service from Verizon Wireless!

To learn how you can snap pictures and capture videos with your wireless phone visit www.verizonwireless.com/picture.

Note: To play video messages sent to email, QuickTime� 6.5 or higher is required. 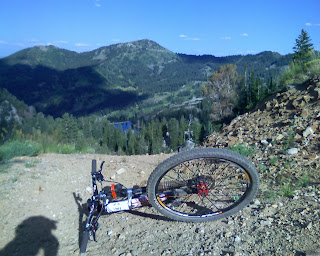 Rather than making my head cold worse by racing the RMR, I decided to go exploring. I attempted to retrace a classic ski tour on my bike. I decided it's easier to travel on snow with skis, but it was neat to see the terrain in summer form. I wanted to ride from Solitude to Alta via Twin Lakes pass. I rode up Serenity and the new trail and proceeded up the service rode to Summit.

Near the top I ran into Anthony Colby who was looking at a map, rather perplexed. He was in town to do some Tour of Utah recon. I told him that I didn't think the course was coming up here. He said it was his day off and he was just chillin' on the mountain bike. It was nice to hear someone from Durango look at the Wasatch and say that it is "spectacular."

The road to Summit was pretty steep. Everytime I ride up that road I swear I'm going to get a triple. I'm going to follow through this time. At the top of the Summit, a nice trail continues to Twin Lake Pass. But it's a lot more rugged and rockier without snow. Although I think that a hike a bike to the pass would be possible, I didn't attempt it. Here is the view from Summit, looking at Wolverine Cirque, which holds snow. Funny to think that in only two months there will be new snow in the cirque. 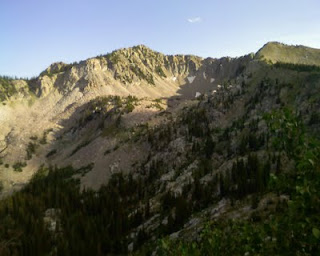 I gave up on my plans to ride to Alta and ended up riding back down on the Sol Bright trail to Brighton and then back to Solitude.

I think though that I was inspired to make an attempt at a version of the Wasatch Classic. What about this route? Heber, Cascade Springs, Ridge Trail, Tibble Fork, Mineral Basin, Alta, Grizzly Gulch, Twin Lakes Pass, Hike a Bike, Brighton, Guardsman, Crest, Mid-Mountain, Powerline, Guardsman, back to Heber via Dry Creek. Lots of bail out options on this route.

You might have noticed that I removed a previous post on how my stolen bike was found at a pawn shop, but sold before I could get there. I removed it because of pending legal action. Someone saw that post, however, and figured out who purchased my bike fromt he pawn shop. The purchaser called me yesterday and offered to return the bike. The problem is that the pawn shop won't return his money. So, the bike is still lost. KSL did a story on this:

I raced the ICup today. I had not one, not two, not three, but four bonafide crashes. I sailed over the bars at least twice. Both times I took the blind corners a bit too fast and ended up going off the trail and off the sidehill. I put in an extra 20 feet of vertical climbing back up to the trail. And then I slid out and bounced on the ground once. I can't remember exactly what happened the fourth time, but I'm pretty sure there was a fourth time. It's all a blur.

My right side just healed up from my Solitude crash, which left me with a bent crank, bent chainrings, and a few stitches in my knee. I still cringe as I remember getting launched off my bike when my pedal caught a rock, and then skittering down the trail in my skinsuit. You'd think that this experience would have caused me to check my speed today, but apparently not since I now have to work on getting my left side healed up.

The learning curve in racing mountain bikes is, as I've come to find out, a bit steep. Jonny imparted some words of wisdom as I was washing blood off my left arm. Staring at the scab on my right knee, he said, "dude, maybe you should slow down a bit." I think that's good advice.
Posted by Jared at 10:27 PM 4 comments: