Lots of low intensity volume this weekend.  Fiddling around with a new point and shoot camera -- Canon S90.

Rice-Eccles in the center.  Must have been a football game going on. 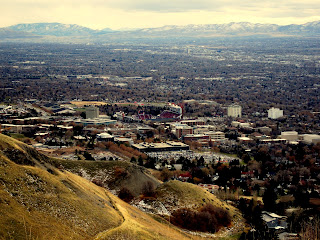 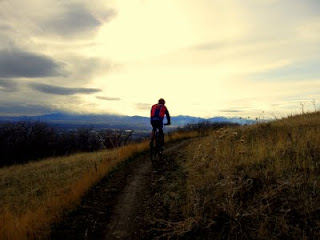 Me on the Bobsled on my CX bike.  Everyone should try it at least once. 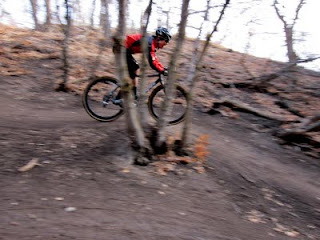 Some DH guy jumping a car. 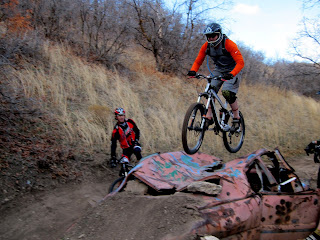 Booter through some sugar. 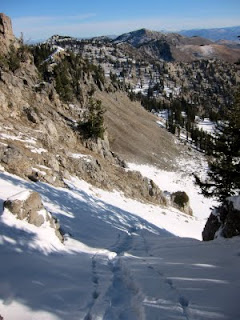 To get to this. 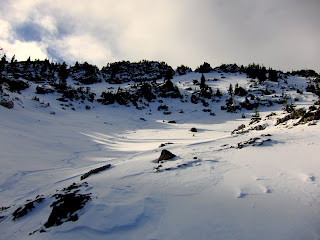 And They Call this Training?

Jeremy Teela put this little clip together. Jeremy and Billy are off to Europe for some hot XC action in preparation for the Olympics. Good luck. 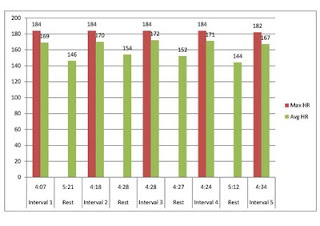 I did an intensity session this morning -- 5x4 intervals, and about 22 minutes of "on-time." I would like to work up to a 8 interval block by mid-December. Some notes:

- Ideally, I would like to get faster throughout the session, not slower, like I did. My understanding is that you get more quality "on-time" if you can have negative split intervals.

- I couldn't push past a HR of 184. I've seen 198 on a bike. Maybe the intervals aren't long enough, or maybe skiing is different than biking. Has anyone figured out their Max HR, Skiing/Running vs. Biking?

- I wish I could do ski intervals at a lower elevation.
Posted by Jared at 12:10 PM 2 comments:

Ski training has been tough with the marginal snow lately.  It was good to get some more.  First tracks this morning.

Mid-chute, watching the sun creep across the valley.

Brett is a jumper, so naturally, he teles.

Billy D incorporating some BC/tele into his Vancouver 2010 training regimen.  I think this is like BC/tele hour 9 this week.


This was the last we saw of the sun.  After that, the storm rolled in.

I've mentioned a number of times that occasionally I wear women's things. (If you are a weirdo (by my standards) that stumbled on this site by googling "men wear women's things," this isn't what you were looking for, go away.) Someone recently asked me, "So how many women's pieces do you actually have?" I'd better not disclose that publicly. But I will say that my gear collection includes a range of women specific skis, harnnesses (ouch -- didn't work out so well), boots, packs, socks,and underwear. The answer as to why I buy that stuff is pretty simple: cost and functionality. If it's cheap and if it will help me get the job done, it's worth it. I should also mention that I am not large in stature and sometimes women's pieces actually fit better. To be clear -- very clear -- if I have a choice between man-gear and woman-gear, and it's the same price and serves an identical function, I will choose man-gear 100 percent of the time.

With that subject out of the way, perhaps the more interesting question is: why do I disclose to my partners (no, not that kind -- this is getting weird) that I am wearing women-specific-gear? Why don't I simply and smugly relish in the fact that I scored a great deal on a functional piece of gear? Well, I've thought about that, and here are a few explanations, none of which is necessarily applicable to me, that come to mind:

A) Trust me, it's not like that. In the harsh environments in which I recreate, I want my partners to be as focused as possible. I want them to fully trust me as I trust them. I can't afford to be a distraction. I don't want them feeling like they have to look over their shoulder, if you know what I mean. So when I show up wearing powder blue clothing or maybe even something with a purplish hue, I don't want my partner to be distracted. I don't want my partner thinking: Is he . . . .? So, I take the proactive, preemptive, cut-to-the-chase, full disclosure approach: yes, I am wearing women's underwear. It fits and it's functional. Can we rip this trail/slope now?

B) The Dirt-Bagger Proclamation. Amongst some mountain people, there is an ethos in which dirtbaggerness is a virtue. Dirtbaggerness is a true counter culture in which renunciation of normal cultural material ambitions in favor of roaming freely in the wilderness (with cool gear, of course) is the standard. What you paid for something is not what impresses; rather, it's what you didn't pay for something. Thus, my proclamation that I use/wear women-specific gear is often a crowd pleaser amongst the mountain dirt-bag folk. It demonstrates a dirt-bagger ethos in a number of ways -- he is willing to wear a woman's scoopneck, pastel green shirt, and subject himself to the ridicule of the stylish brethren, just to have means to pursue his passion! Cool dude.

C)Beat This! I am the first to admit that I am competitive to a fault. Sometimes, it's hard not to look at the scoreboard of Tuff-ness. There are all kinds of games of Tuff and in my realm such games can range from climbing or descending this or that in x amount of time without this or that kind of aid, to death marches across the Grand Canyon (see below). One thing that is hard to compete with, however, is the tuffness of wearing women's clothing/gear. It's a statement that you are confident and Tuff and simply don't care about what people might think of your appearance. In many circles, it's simply too hard to compete with a man comfortable in women's underwear.  So when I say competitive to a fault, I mean so competitive that I'm willing to invent a game in which only I am likely to play.  Lame, I know.

In conclusion, I'd like to help you out, whether you are man or woman. I recently scored a pair of Scarpa Divas for $90. Yep, $675 boots that were basically brand new for $90. (I'm taking this at a Dirtbagger angle, see B above.) If you look closely, Scarpa Divas (woman) are essentially Spirit 4s (man), but with different colors, and with a volume-reducing insole that is removeable. I don't know that for sure, but I have a pretty good reason to believe that is the case. While you probably won't get the Dirtbagging deal that I got (I'm now taking the Beat This! angle, see C above.), you can get a pretty decent deal on some women-specific boots that could very well suit your needs.

Sierra Trading Post is selling some Scarpa Divas (Spirit 4s) and some Scarpa Star Lites (Spirit 3s) at a decent discount.  If you subscribe to their Deal Flyer, you could probably get an additional 20 percent off and free shipping.  That's more than 50 percent off retail. 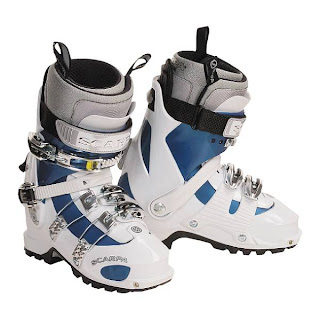