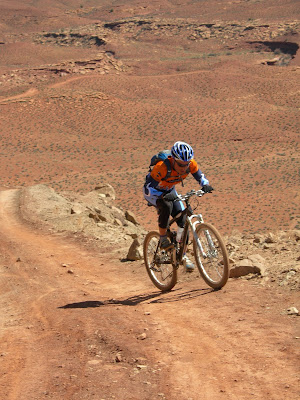 There are three major climbs on the White Rim Trail. The first comes at about 50 miles and is called Murphy's Hogsback. And yes, it really is as steep as it looks (see pic above). I was a bit startled by the climb. After cruising for miles and miles on flat road, all of the sudden I looked up, and there was this road leading into the sky. I kind of chuckled at the sight of it. My amusement was quickly diffused by the necessity of shifting into the granny and figuring out a way to make it up the climb. For some reason, I was driven to clean the hill -- to ride it without unclipping. And although at one point I think I was perpendicular to the hill, I rode it clean. I think I even saw a heartrate of 190. For a moment, I also thought I saw a unicorn. Lucky for us, we had lunch waiting for us at the top.

While we were eating lunch, we were overtaken by a solo, self-supported rider on a fully rigid single speed. Granted his bike was light, was titanium, was a 29er, and was pimped out, it was still a single speed (34x19). Single speed guy started with 170 ounces of water, took very few stops, and ended up riding the trail in 9 hours and 40 minutes. Tough.

Chapter 8: Riding Next to the Green

After descending the Hogsback, we rode for several miles next to the Green River. Unlike the first 50 miles during which we made frequent stops to see the sights, we rode the last 50 miles like we were on a mission. We lined it up and pacelined it on the trail. It was almost surreal as we cruised over slickrock and sand against the redrock backdrop, along the White Rim, which often dropped off several hundred feet, in view of the snow-capped Lasal Mountains, and next to the seemingly placid Green River. The scenery almost overshadowed the twinges of fatigue.

At about mile 90, the epicness and scenic-ness of the ride had nearly worn off and I had been lulled into grinding out the miles. I was shaken out of this mode when, again, for the third time, I looked up and was shocked to see the road climbing up a sheer redrock wall. At Hogsback, I chuckled. This time, I nearly laughed aloud. We had been riding for over seven hours, we were all fatigued, and now, awaiting us was a steep climb that switchbacked up a cliff of over 1000 feet. Again, I shifted into granny, and spun to survive. Again, lucky for us, at the top was a cooler full of soda and Gatorade. After a nice little break, we saddled up for the last time for the last leg to the cars. The last leg is a graded 15 mile dirt road that was surprisingly challenging, made so by the long miles we had put in that day. I'm not ashamed to admit that when the cars came into view, I raised my hands, pretending I had just won a Pro Tour race. I think I saw Jon shed a tear.

On the way home to SLC, we stopped at Wendy's. For some reason, the employees at this particular Wendy's were challenged. Aside from ignoring us, ignoring sanitary standards, overcharging us, and being unable to fulfill our order on the third try, we learned that getting a bun with your sandwich is not a given. While waiting in line, a fellow strolled in, walked up to the counter and handed the cashier a foil-wrapped sandwich, stating that it was not what he ordered. "What did you order?" the cashier asked. Fellow: "Meat, cheese, and ketchup, not a chicken sandwich" he said, exposing the chicken breast for the cashier to see. A few minutes later, the cashier handed a foil-wrapped package to the fellow, who took it, opened it, and promptly returned. "What's wrong now?" the cashier asked. "Well, there's just meat, cheese, and ketchup, and no bun." "Isn't that what you ordered? Meat, cheese, and ketchup?" Response: "I thought the bun was a given." "Oh," said the cashier, as she again reached for the foil-wrapped, bun-less package.

Several times this week I have had flashbacks of the White Rim ride (no unicorns though). It was undoubtedly one of the top 3 rides of my life. Many thanks to my fellow riders.
Posted by Jared at 9:30 PM No comments: 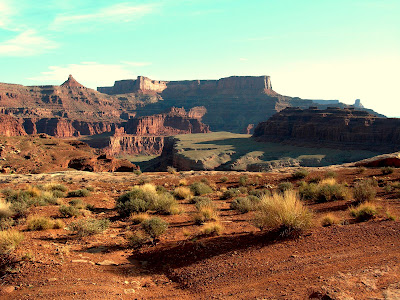 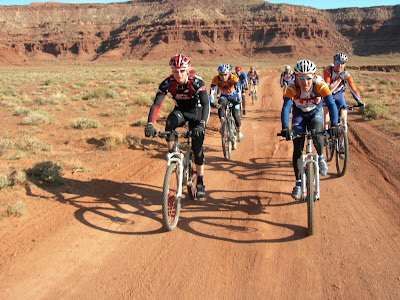 "To fully appreciate the White Rim Trial means embarking on a three- to four-day trip with stays in designated camping areas along the way. Some elite bikers are quick to boast of knocking of the White Rim in a single day, but they are missing the point. A White Rim trip is more than pounding out an off-road century; you can do that anywhere. You'll want the extra time to bond with the desert, to feel its pulse, and revere its wonderment. . . . [A] single-day trip is an incomprehensible feat for the average biker and one that shatters the difficulty scale."

A bunch of us headed down south to "pound out an off-road century" -- the White Rim. Photos of our ride can be found and, if wanted, downloaded by clicking on the pic below. (Best to simply click on "Slideshow.")

I'm pretty sure that all of us would agree that even though we did it in a single day, we bonded with the desert, felt its pulse, and revered its wonderment. It was nothing less than epic. It was epic in length, epic in scenery, epic in difficulty, and epic in good times. Of course, an epic ride is only so because of its epic chapters. Here are a few:

Chapter 2: Three Guys Two Beds
I was somewhat of a late edition and Dave and Jon graciously offered me a place in their room, a room with two beds. Like any good friend, Jon went beyond the call of duty and offered me a place in his bed. Like any macho guy, I declined, even though the bed looked much more comfortable than my Thermarest on the floor. At 3:30 am, I tossed and turned and rearranged my sleeping bag. At 4:30 am, the bed looked pretty inviting. At 5:30 am, it was time to ride. Note to self: for rest's sake, it might make sense to double up.

Chapter 3: Shafer Trail to Musselman Arch
We rode the White Rim Trail in a counter-clockwise direction. This meant a short road ride to the Shafer Trailhead. The start was cold. I was in full on raingear. To stay warm, we set a fast pace. Ted was obviously prepared with two bananas strapped tightly to his Camelback. Jockstrap Dave (Dave earned this nickname when he told us about how he rode from SLC to Lake Powell wearing a jockstrap. He says he still has scars.), Jon, and I were in tow. The descent down Shafer to the rim was about 1000 feet. A wrong move would have meant a long tumble, and in several places, a long free fall. The picture above is the vista that greets you as you ride to the Rim.

Chapter 4: The Stunt
Musselman Arch is a natural arch that connects two cliffs on the Rim. The arch is about 10 feet across and a few hundred feet long. The arch is suspended above the ground several hundred feet. Walking across the arch gave me vertigo. I wanted to get down on my stomach and crawl across the arch. On a dare, Jon mustered up the courage to ride across the arch. Although it took a few minutes of tense dialogue between Jon and Dave, who discouraged the stunt, Jon went for it when he heard someone say that he didn't dare. A video of Jon riding across the arch is embedded in the photo album referenced above.

Chapter 5: Double Paceline on the Dirt
Most of the guys on the trip are roadies. True to our nature, we rode as such. For miles and miles, we lined it up and, as in the picture above, rode a double paceline. Although it provided shelter from the wind, I learned that dirt pacelining presents certain challenges. Mountain bike tires flip up all kinds of stuff. After getting rocks spit into my chest and sand rooster tailed into my hair, I was forced to give up some of the draft and keep my distance. Another challenge is that in a dirt paceline, it's hard to see what's in front of you. Road etiquette requires that you point out obstacles or road irregularities. This isn't possible on a bumpy technical road. I received many rock, drop off, and sand surprises.