Tomorrow, I'm going to Denali with my brother Aaron.  I know, I said in previous posts that I'm not going to Alaska this year, but . . . .  I'm going.  I've put aside speed plans and am going just to go and just to ski.  And I've found that preparing to "just go" is an adventure in and of itself.  Over the last few weeks, I've pulled together a whole crap-ton of gear.  Initially, a maintained my fast and light mindset.  But as I kept realizing that I needed a solar charger, and a spork, and a stove board, and lots of food, and this and that and this and that, the mindset kind of fell by the wayside.  This was confirmed quite clearly to me last night when my friend and former Denali guide Brian Harder told me I needed to pack a steel shovel that he went to the hardware store to procure.

The present result?  My pack weighs at least a third of my weight.  It is humongous.  And it doesn't nearly hold all the stuff I have decided that I "need."  I have a duffel bag stuffed with 50 pounds of food, mostly dehydrated.  And I have a bag full of climbing and skiing gear.  And the big question looms?  How in the world am I going to haul all this stuff up a mountain?  I'll let you know how it works out.

Here is a list of what I will carry, excluding the food, which is worthy of a post by itself (maybe later): 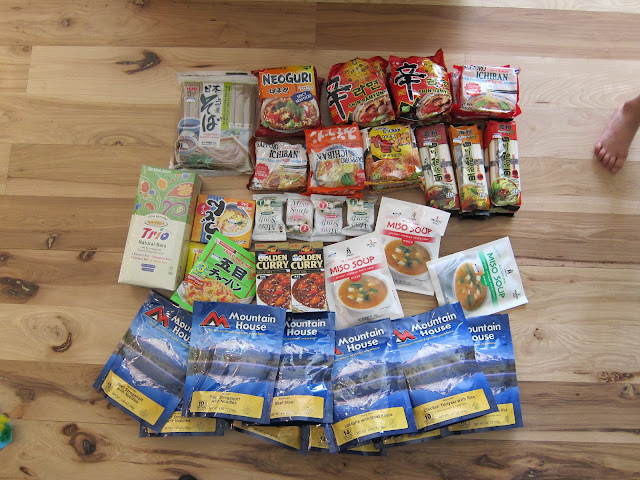 SPECIAL THANKS TO LA SPORTIVA, CAMP, PATAGONIA, GREGORY, FORTY BELOW, AND BACKCOUNTRY.COM FOR THE SUPPORT!!! 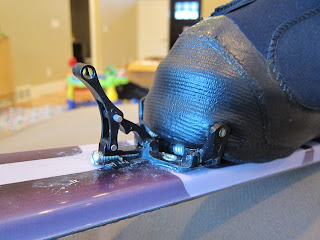 Stuff I need to get STILL:


The second biggest question that looms is: what have I forgotten? (and how can I make my load even heavier?)
Posted by Jared at 11:30 AM 3 comments: 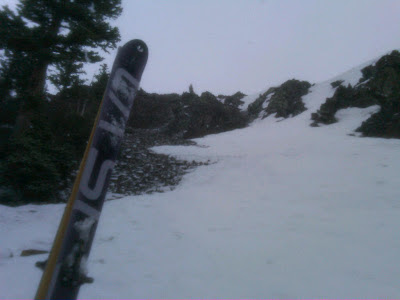 Hah hah, Dakota Jones' report of his victory over "captain ski-mo" is pretty funny and well-written too:  http://blog.montrail.com/2012/05/a-race-report-of-much-depth-and-consideration/

Aerobically, I'd say there is a direct correlation.  Aerobic fitness=aerobic fitness.  And in any endurance event, that is a big component.

Movement-wise and muscularly, I think there is some correlation. The upward, quad-intensive, movement is very similar.  For example, the first 2.2 miles of the Grandeur "Fun" Run climbs 3,300 vertical feet.  Granted, that is not typical profile for a running race.  But that particular profile is essentially the profile of any rando race or a typical skinner in the Wasatch.

However, running is different in that it requires much more use of calf and foot muscles.  The limiting factor on the steep uphills for me were my calves.  Poles helped, but my calves were on fire for the whole uphill, and later in the race, they cramped.  With skiing, we use heel risers, and don't work our calf muscles in the way running does.  (Maybe we should start skiing without heel risers?)  In addition, running is different in that it demands eccentric motion from the quads.  Skiing certainly strengthens the quads, but nothing can prepare the body for running downhill, other than running downhill.

One other aspect of running that I felt my body lacked was the ability to quickly and smoothly turn my feet over on the flats.  My cadence was slow.  But no surprise since skinning is a much slower exercise.  I felt boggy through 2.5 mile flat section and looked over my shoulder many times.  At the end of the flat section Chris Cawley caught me.

I guess this is a long way of saying that if you want to be a runner, there is no substitute for running.  But if you like skiing, ski fitness translates to running fitness to a certain degree.  Tom Diegel who "won" the run in 1:44 (course record!) is an avid skier.  Chris Cawley who was in 3rd is an Alta 'troller.

Asterisk. I was able to keep it going for 10 miles, but that was all I could do.  Several tough guys and girls took a SECOND lap.  Me, I barely made it to my car, although, part of that I attribute to just coming back after taking a month off.  And three days later, I'm really sore, still.

And to bring it back to the Transvulcania, I marvel at what guys like Kilian Jornet can do.  He skied a full season.  Then suddenly, he shows up at a fully stacked ultra marathon, breaks the course record, and finishes in 3rd place.  Not to take anything away from the incredible, awesome, stellar, break-through performance of Dakota Jones, my guess is that at the Transvulcania Kilian was both prospering and suffering from being a skier.

This morning, Andy was nice enough to join me on a retrieval mission. I had hopes of picking up the junk show I left on Superior--goggles, a pole, and a ski.  Amazingly, we recovered all three items.  My goggles--Oakley Asian Fit (for people with flat faces/noses)--were in decent shape although I might need to replace the lenses.  A few hundred feet above in a tight chute, we recovered my Dynafit carbon pole, or what was left of it.  The strap had been ripped off the top of the handle and the shaft was broken.  And then a few hundred feet above the pole and 50 yards across the slope, Andy spied a green La Sportiva hand waving at him in the snow.  The Hi5 ski and RT binding were recovered and look to be in good shape!

Walking up the path I fell down gave me a bit more perspective on the incident.  Suffice it to say that I felt sick, grateful, amazed, scared, and more resolute (to avoid a repeat) as we climbed where I fell.  Turns out, that vertical-wise, the fall was longer than I previously thought.

View of Broads Fork and Mill B

Thanks to everyone for the nice words and the support.  It's been nearly three weeks since the "incident" and I'm happy and grateful for my current state.  Physically, I'd say I'm at about 65 percent, mostly due rib and right hip injuries.  Gladly, my butt, left hip, and right knee are no longer issues.

Mentally, I find myself in a weird place.  I want to get out, but I don't.  Today I got out for a little walk.  I walked up Mill B North to one of my favorite viewpoints in the Wasatch.  I took the photo below.  It depicts a lot of cool terrain.  Depicted are the Broads Fork and Mill B drainages.  In the distance, classic Wasatch peaks loom.  From left to right is Monte Cristo (I think), Sundial, Drom,  Sunrise, and the SL Twins. 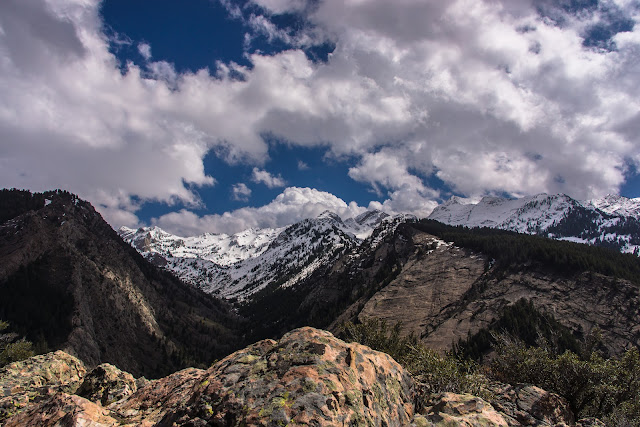