Ok. I admit it: I've been sandbagging. I've been getting a kick out of telling people that my first serious training ride was April 5, 2008 (the White Rim). However, for purposes of my 12 Step Training Plan, Step 5 of which is to be forthright about past training exploits, I need to disclose that I did, in fact, train through the winter. Just not on the bike. I should probably also disclose that this training often included 2 hour threshold/VO2 Max intervals at altitudes of over 10,000 feet, with several pounds of equipment strapped to my feet, my back, and my arms.

Rest assured though; I'm the type of sandbagger that you need not fear. Specifically, I am a Visionary Sandbagger, meaning, in my mind, I am the fastest in my category, and on the road I am the fastest too -- it's just that there are some who, inexplicably, ride faster than me. Though inexplicable and karmic-ly wrong, I don't win all my races. In fact, now that I think about it, except for some weekday crits that don't count, I don't think I've ever won a bike race in my entire life (that's Step 4 of the Process by the way). That, of course, is not because I'm not the fastest -- it's just because of a variety of issues, many of which simultaneously present themselves, like equipment, nutrition, position in the peloton, having a demanding day job, two kids (with one on the way), riders who can't hold a straight line (sometimes because, admittedly, they are dodging me -- that's Step 2) . . . . sorry, I'm sandbagging with excuses now.

Still, I cannot deny, and no one can make me deny that in my Visions, I go fast. And, despite my three weeks of on-the-bike-training -- see, there I go again -- I cannot deny that I'm feeling fitter and faster. In fact, I feel better now than I did during mid-season last year.

At Saturday's Tax Day Circuit race, in which the Cat 3s raced with the Pro/1/2's (the mention of which is yet another form of sandbagging), I felt pretty good. It may not have appeared that way when I got dropped no less than 5 times, but appearances can be deceiving. Had I been in 2007 form, I am pretty sure I would have (a) cramped, (b) gotten dropped once and only once, and (c) although related to (b), never would have been able to get back into the mix. How's that for a glass-is-half-full mentality: even though I got dropped multiple times, I clawed my way back to the peloton multiple times. As Napolean would say, "Yesssss." What is more, I actually made it over the top of the brutal 800 megawatt climb with the peloton 3 times. And if I would have had better position . . . . yep, there I go again. . . .

Then, yesterday, when I did an hour of hill intervals (I use this term loosley), I was surprised at how good my legs felt after the Tax Day sufferfest. Not once last year did day 2 of a hard block feel that good.

So, next week when you see me at East Canyon, know that although it may not appear to be so, (a) appearances can be deceiving, and (b) in my mind I will be going fast. Heck, as you train this week, remember that I will -- in my mind of course -- be going really fast.
Posted by Jared at 10:02 AM 3 comments:

First off, congratulations to Bart and Rosie on their 2nd child -- a 7 lb baby girl born at 12 am this morning. Life is beautiful, especially when they are that small. As I always like to say, I've hooked into trout bigger than that.

Second off, positive vibes and better karma to the likes of the Clintster and Mateoman -- both of whom broke bones in the Triple Valley Stage Race, which shall forever be remembered as "that one race where there was a big crash, a bike 10 feet in the air, and a Life Flight helicopter." I hope y'all get better soon.

Third off, the Triple Valley Stace Race (the "TVS") was fun and a good way to bring in the racing season. I'm still trying the make the transition from snow to road, so I raced "naked" and without expectation, meaning, no HR monitor, no powertap, and no looking at results. I went with the objective of just racing, listening to my body/legs (and the Force), and determining what I need to do in order to develop better form. All in all, it went ok. I was pleasantly surpised to learn later on that I finished "in the money." Some notes:

A) I need to develop a more efficient pedaling stroke. Watching Chase on his junior gears spin at 100+ rpm for extended periods of times was inspiring, especially when he passed me during the TT. Hopefully, as I spend more time on the bike, this will come.

B) Push through the discomfort/pain. When Chase passed me during the TT, I sat up for a minute, thinking, that's it, I'm done. Since it was my first ride on the TT bike, it was incredibly uncomfortable, and I didn't feel like I was going very fast. I was, as Ligget says, "pedaling squares." After a stern conversation with myself, I was able to pull it together and finished the TT. Oh yeah, I'm going to be spending more time on the TT bike. I need to get better at that.

C) Gotta race. I went to the circuit race with the objective of seeing where the edge was. I spent a fair amount of time on or off the front. It was somewhat gratifying on the 5th or 6th lap to see the group break apart, leaving only 10 riders left (I think I was the 10th rider, barely, and nearly fell off the edge). And I was happy to see teammate Jon advance into 3rd on GC. I have to admit, I was slightly disappointed that there wasn't a little more action during the race. Gary mentioned that he was thinking of pulling us because we were coasting through the finish area. Congrats to Boudie for hanging on the "hill" and taking the sprint (I can't believe we let you set pace up the hill on the final lap). Nice job to all.
Posted by Jared at 10:22 AM 5 comments: 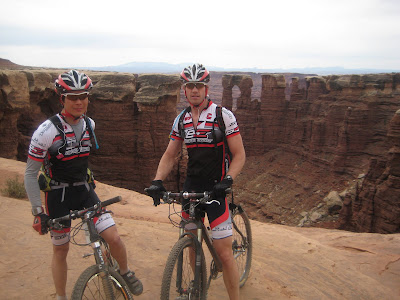 On Saturday, I rode the annual Jim Hutton White Rim Ride, a 100+ mile mountain bike ride on the White Rim. Many thanks to Jim, Monte, Sid, and the others who make it happen each year.

The Rim Ride was probably my first legitimate "long ride" of the year. It was somewhat of an experiment -- how well does my ski fitness transfer over to the bike? The Answer? There is lots of overlap, but it doesn't transfer over 100 percent. Duh. I know it's obvious, but somethings you just have to actually experience. Aerobically and strength-wise, I was okay. However, cycling uses some non-skiing muscle groups and I wasn't conditioned to sit on a bike for 10 hrs. Put another way, I was slightly uncomfortable, and by the end, I was hurtin'. In fact, as I was going in slow motion up Horsethief (see illustration below), I had a conversation with myself to convince myself that it was worth it. 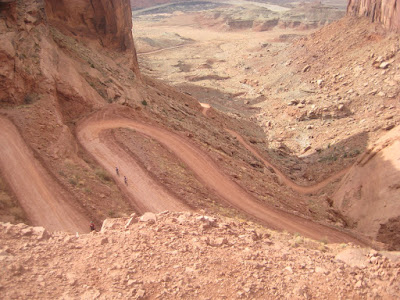 Between the Samurai and myself, despite the discomfort, we decided that the positive aspect far outweighed the negative aspects.

1. Got to play dress up with the Biker's Edge crew in the desert. Matching helmets (GIRO Ionos) and glasses (GIRO Havics). Thanks GIRO. Matching bikes. Thanks Cannondale and Oh-ran. Matching jerseys and shorts. Thanks Biker's Edge. 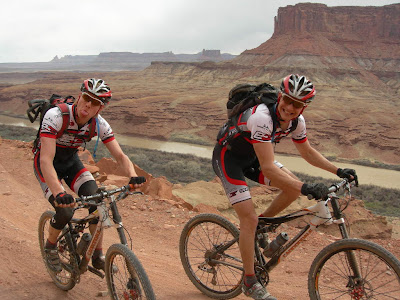 2. I got to touch and hang my bike on the Fox rack. Yes, that Fox. It's not pretty and far from confidence inspiring, but gets the job done. Thanks Fox. 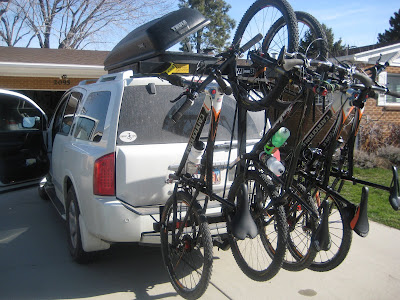 3. I got my base training in for the year. 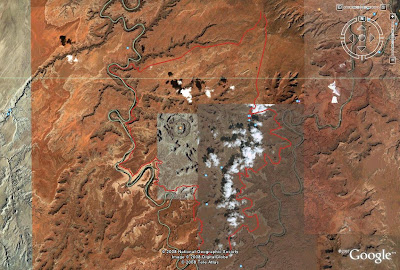 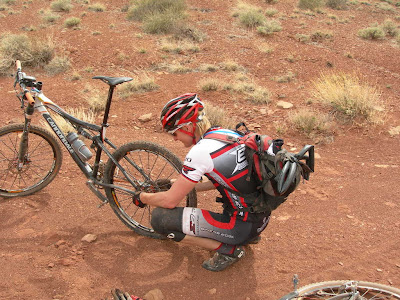 4. Had I not been pegged for eight hours, the scenery would have been awe-inspiring. Still, it was great. 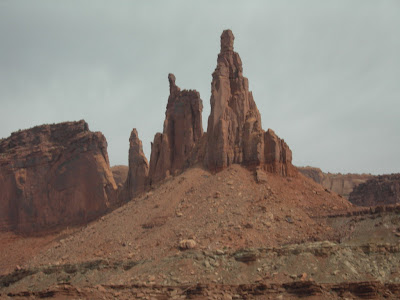 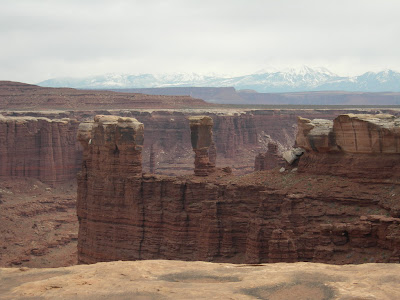 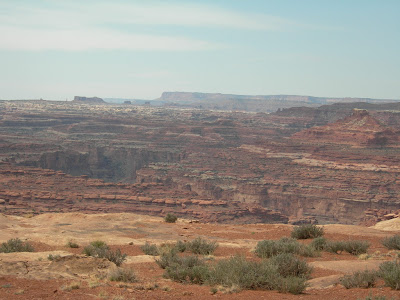 5. MOST OF ALL, the Rim Ride provided me with the opportunity to struggle. That's one of the things I like about cycling and endurance sports. I'm not sure why I impose struggles on myself; life has enough built-in struggles. Maybe it's because I feel like I need to prove to my immigrant ancestors that I'm as tough as they are. Maybe it's because I'm insecure and like to feel like I'm accomplishing something. Maybe it's because I need lots and lots of practice at overcoming struggle. In any event, I like the challenge -- and the struggle -- that a 100 mile mountain bike ride presents. I like the anticipation and anxiety at the beginning of the ride: am I prepared? will I make it? I like the inevitable crux of the ride -- that "do or die" moment where you either dig deep or crumble. I like the feeling at the end of the ride that I have accomplished something and have overcome the struggle. Or, if I "died," I like to analyze why and struggle to make it better next time. I like to think that each epic ride is a life in and of itself, a time improve, a time to find oneself, a time to make friends, and, of course, a time to struggle. 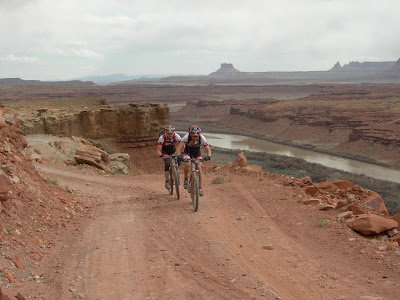 Here's a guest TR courtesy of Tim and Trent. They started at White Pine, went into Red Pine, over Maybird, under the Pfeif, into Hogum, up to Lighting Ridge into Thunder Bowl and out Bell's. This tour is classifies as "epic" in by book. Nice job.

Here are some photos.