On Friday, I ran (mostly) from the North Rim of the Grand Canyon to the South Rim of the Grand Canyon. Because I'm not really a runner (the collar of my team bike jersey says, "Running is for Criminals"), it felt like a long way and now my feet hurt. But it was worth it and was a great adventure -- definitely something I'll remember for a long time.

We left the Wasatch front on Thursday night, drove to Panguitch, had dinner at the Cowboy Smokehouse (great restaurant!), proceeded to Kanab, then to Jacob's Lake. We got to Jacob's Lake Lodge about 1 am in the morning and slept for a few hours. 4 guys, 2 beds -- I can handle it. We got up at 5:30 am and drove 1 hr to the North Rim. When we got to the trailhead, it was 7 degrees.


For whatever reason, I've never been to the Grand Canyon. I guess I've kind of thought that it was too touristy or too mainstream. I've been missing out. I was pretty much stunned as we descended the North Rim. "Grand" barely describes the the landscape and strata laid out before and under us.


The trail from the North Rim descends from a little over 8000 feet to a little over 2000 feet. The first 3 or 4 miles are quite steep, so we fast walked this portion.


I would stop and take pictures, then run and catch up with the group. In the photo below, you can see the group descending on the trail just as the sun began to hit the cliffs. Magical.


After Cottonwood Campground, we ran. We ran through the "Box," a narrow canyon section that follows Bright Angel creek, which eventually empties into the Colorado River.


Bob, stretching out after running through the Box.


Barry and Bradley running out of the Box.


By the time we hit the Canyon floor, the temperature had risen significantly. People were perspiring. And I could smell some major BO. As I was running through the Box, I was thinking, man, someone stinks. I haven't smelled that smell since Day 4 of the Pierra Menta -- after everyone had been wearing the same skinsuits for 4 days. It was strong. When we hit the Colorado River, I paused on the bridge to take it all in.


As I was standing on the bridge -- all by myself -- I was surprised to smell the BO again. And it got me thinking: I am the only one on the bridge, I smell BO, it's definitely BO . . . wait, could it be me? I smelled my shirt. Gag. It was me! But it couldn't be me I thought. I know what I smell like. I've been smelling myself for 35 years. So I smelled my left armpit. Gag again. It was me! But no, it couldn't be.

So, there I stood on the middle of the bridge over the Colorado River in the Grand Canyon smelling one armpit and then the other. Frantically. What was going on? What did I eat? How could be happening? And then I figured it out. Last week, in preparation for this run, I bought a fancy running hydration pack at the REI garage sale. I made a point to choose the cleanest looking, least-used pack, and the one that I settled on was a woman's model. It fit, so I bought it. I should have sniffed it.

It turned out that as my perspiration soaked into the pack, it was bringing to life some rank BO spores or some wild-living-bad-smelling thing. Not only had my shirt been contaminated. My body seemed like it was emanating that bad BO. Gross. I was wearing a pack that belonged to a woman with really really bad BO. And now the BO was on me. Here I am, wearing the BO pack, comtemplating jumping in to the Colorado to cleanse myself. Oh, and the shirt also happens to be a Smartwool woman's model as well.


Once you hit the Colorado River, the trail starts heading up again. There are two options to the South Rim, the South Kaibab and the Bright Angel trail, which we chose. We thought this sign was amusing, but a little misplaced since it is at the bottom of the Canyon.


Before heading up, I scrubbed my pack and washed my shirt in a stream. I didn't put my shirt back on, and instead ran topless from the bottom of the Canyon to the top of the South Rim. Here's a shot with 4 really steep miles to go. South Rim is on the top.


Unfortunately, because I was out of breath and because my camera got a bit wet during the BO cleanse, I didn't get many pictures of the south side. And I have to admit that I was unable to run 100 percent of the last 7 miles. I ran the first 5 miles, but as I gained altitude and as fatigue set in, I couldn't keep the legs going. The last 2 miles I would run a few hundred yards, then walk, then do the same again. By the time I hit the South Rim, my legs, particularly my feet and ankles were pretty well spent. The full trip was about 25 miles. As I sat at the top of the South Rim waiting for my compadres, I thought of the crazies who do a Rim-to-Rim-to-Rim. That would really hurt.

The reward for crossing the Grand Canyon was a 4 seat Piper Arrow waiting for us on the South Rim. While Rim to Rim by foot is less than 30 miles, Rim to Rim by car is 225 miles. Stan, the orchestrator of the trip, arranged for a plane to fly us back from the South Rim to Provo.


Bye Grand Canyon. I'll be back. 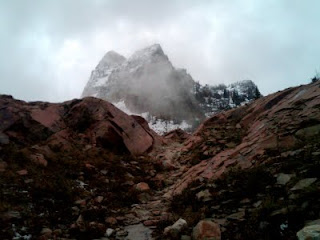 I was thinking of doing a scramble across the LCC ridge this morning, but called it off because it snowed. So I ran up to the Sundial. Running 3 miles downhill is about all I can take. Any trailrunners out there? Luke? Do you like running downhill? Does it hurt?

I've been doing a bit of unconventional (for me) training lately because I got sick again. I've been trying to prevent a sinus infection, so for the last 10 days or so that I've tried to avoid hard aerobic activity. Hence the climbing emphasis.

That said, the recent climbs and runs I've done in the mountains have been really refreshing. They've allowed me to see the mountains in a different way in a different season. Climbing crags on Olympus, Big Cottonwood, and Little Cottonwood, I've been able to move through the mountains in yet another form. Climbing the slabby granite of Lisa Falls the other day gave me a new appreciation for that same, but quite different Lisa Falls I skiied a few months ago. The cirque surrounded by Dromedary, Superior and the Sundial was just as surreal without snow as it is with snow.  I'm not quite certain what underlies my obsession (I admit it) with moving in the mountains. Of course, the mountains are beautiful. But it's more than that. For me, there's something very fulfilling about being able to move deep in the mountains elegantly -- speedliy, yet safely, under your own power. I suppose part of the attraction is the challenge. Whether it's on skis, on two wheels, in running shoes, or in a harness, elements of skill are required. It's fun to develop those skills to a point where they facilitate elegant movement. Another aspect of the challenge is the element of uncertainty. The faster and higher and deeper you go, the margin for error becomes smaller and smaller.  It's a challenge to know where you draw the line.
Posted by Jared at 9:39 PM 3 comments:

I think I've worked 40 hrs in 3 days, but I'm not sure because my head hurts. During times like this, video clips like this keep me sane: 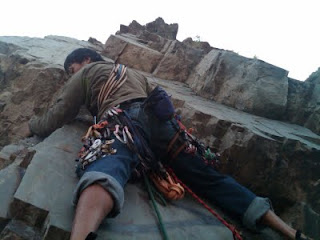 Spent some family time with Brother Sam, Brother Aaron, Cousin Isaac on the West Slabs. Sam has been into climbing this summer and planned an outing on Mt. Olympus. We started in Olympus Cove, hiked up the Z trail, up the creek, and then climbed the West Slabs. Sam climbed it free a couple weeks ago in the snow and ice, but this time we roped up and "simul-climbed" in two teams.  The top climber places protection and the bottom climber cleans.  We tried to keep at least two pieces between us, just for safety's sake.  No falls. At the top, Dylan Freed caught up to us in his shorts and t-shirt. He likes to be free too. It was a nice fall day. Here are some pics.

Sister Seidi and Baby Charlie joined us to the base of the slabs:


Sam sorting through a rack of cams, trying to find the right one.
Didn't get any harder than this.

The A team working their way up. 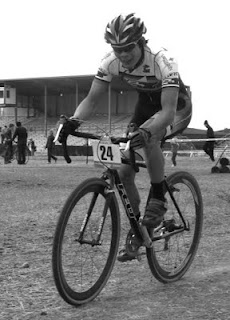 
Cyclists talk about having certain "sensations" in their legs that indicate good form. I think I may have felt one such sensation on Saturday at the CX race in Ogden. I was able to push it pretty hard for a solid hour. I didn't have any allergic or asthmatic reactions.  And it was a good kind of pain.  This makes me think that I'm on track for the upcoming ski season.

To the extent I can, I've been trying to get some time on skis -- 4 days so far.  Since there isn't a whole lot of snow and the snow is so far away, I'm relying on CX racing to build fitness. By November, I hope to be doing some structured (and not-so-structured) training on skis.  Hopefully, I can be going fast by January.

Is it just me, or are the snow-covered mountains really inspiring? 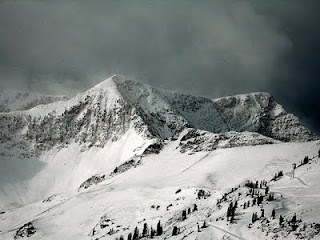 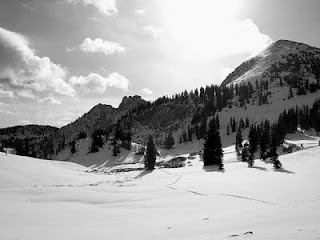 Tracks through a Sugarloaf meadow.

It's open season on CX right now.  Dave Bergart has organized a CX series in Idaho and the main event is Moose Cross.  This is its second year running.  There will be two days of racing and a party on Saturday night.  Since it's Idaho and all, and just to be clear: BRING BIKES, NOT GUNS!

I'm probably headed up for the Saturday race (unless it snows a lot).  I may try to float the South Fork of the Snake before the race.  Anyone interested in carpooling?
Posted by Jared at 10:38 AM 1 comment:

As I was skinning up the mountain this morning, I was trying to remember the last time I skiied. I think it was the Stuper Tour, which means that it was 4 months and 13 days ago, which also means that the ski season can potentially be 8 months.

I wasn't sure what I would find -- the first snow storm and all. But I knew that that I would at least get to do some skinning up the Albion road. And to tell you the truth, that's what I have been craving the most. Lately, I've found myself walking up stairs, pretending I'm skinning. I almost bought some roller skis so I could mount Dynafits on them and skin up Olympus Cove. I still might.

Anyway, climbing up through Albion Basin and up to Catherines and then finding some skiiable snow was like coming home. It's going to be awhile before we have a decent snow pack, but a little taste is nice.