I've always thought it would be cool to ride a bike to Lake Powell via mostly dirt roads.  I've talked about it, thought about it, but never have done it.  So, when my brother Aaron indicated an interest in bikepacking, I knew my chance had come.

I bought a bike.  It is steel and not very light, which is good because it needs to carry me, gear, and food for a lot of miles over some pretty rough terrain.

Tomorrow, brother Aaron and I are going to start from my driveway, ride up Big Cottonwood, to Tabiona, Nine Mile Canyon, Price, some desert roads to Moab, Lockhart Basin, Beef Basin, over the Abajo mountains, to Bullfrog Lake Powell.  Since the ferry crashed and is closed, we hope to hitch/buy a ride to the other side.  Then we will proceed up the Burr Trail, to Boulder, to Torrey, to Fishlake, Johnson Reservoir, catch the Skyline drive at I-70 and ride it to Highway 6, cross over and ride to Strawberry Reservoir, through Heber, and back to SLC.

It will be a long journey.  It will be a hard journey -- approximately 900 miles and 80,000 vertical feet.  There is a pretty good chance we will not make it or complete it in the time we have (10 days).  But we are going to try and we know we will have an adventure.

Here is a rough map of our proposed route: 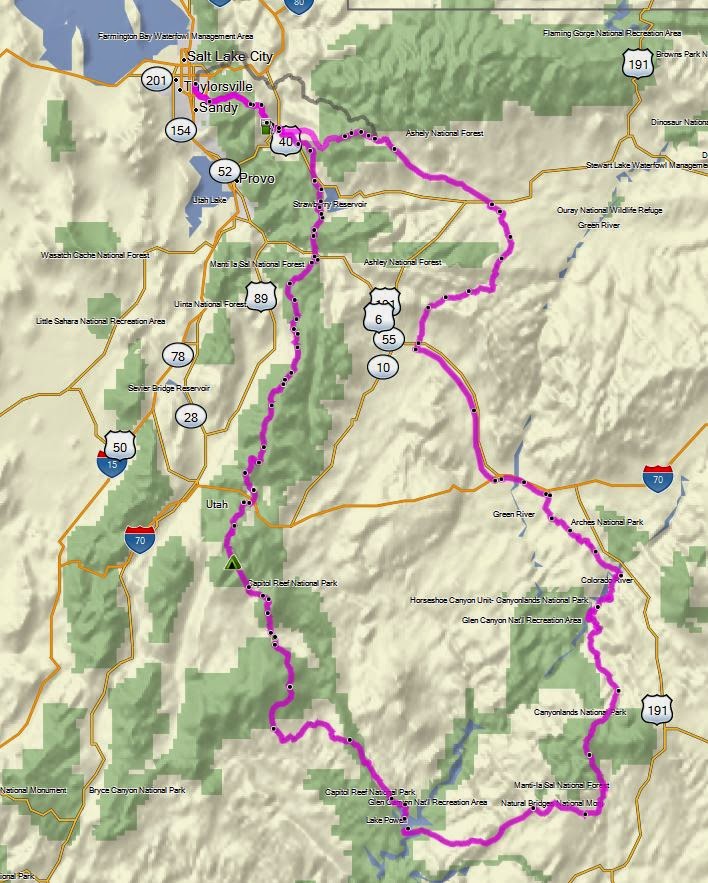 Initially, I wanted to ride through the Ouray Ute Indian Reservation to Moab, but it's against the law, and I was told I'd get in big trouble.  So, there is a large chunk between Price and Moab that will be on pavement.  There is also a chunk of pavement from the Abajos to Lake Powell.  And of course from SLC to Tabiona. Other than that, most will be on backcountry dirt roads.

Since we will be mostly in the backcountry, we have to be relatively self-sustained.  It's been a challenge figuring out how to carry all the gear we need plus 4 days worth of food.  But, it's come together, and now all we have to do is pedal.

Hmmm! this is so fabulous and amazing track.

Thank you for sharing us education, please kindly visit mine :D