The Stuper Tour: Alta to SLC

I'm still trying to digest the Stuper Tour, and I'll put up a more detailed post after it's digested, and after I recover, and after I stop shaking (from fatigue, fear, and giddiness).

The Stuper Tour is the official name given (by Noah Howell) to a tour that begins in the Alta parking lot and tags several high points, most of which are over 11k, including, but not necessarily limited to, the following:

The Stuper tour exits out Bells Canyon and ends on Wasatch Blvd. The Stuper Tour is somewhat of a play on the "Super Tour" as discussed in Wasatch Tours aka the Wasatch BC Skiing Bible by Hanscom and Kelner. The name was born as Noah and I were sprawled out on a rock at noon -- in a stupor -- after just having summited 6 peaks, with several peaks between us and SLC. The name is a nice melding of Super, Stupor, and come to think of it, Stupid. 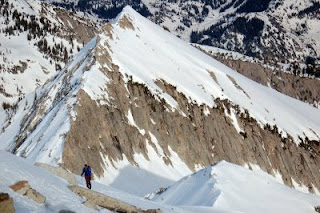 Photo Above: Noah Howell with Bighorn Peak in the background, ascending Lone Peak, the last pitch of the Stuper Tour. 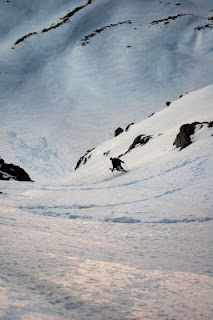 Photo Above: Noah Howell doing what he does in a couloir on Lone Peak's east face.

cool! Sometimes I wish I was not a bike racer, I missed out.