Snow-wise, it's been a pretty eventful week. I think Alta has had 150 inches in the last 10 days. It has delayed the biking a bit and it has delayed the spring ski objectives I had been looking forward to, but who can really be ungrateful for powder?

On Monday, my brother Aaron returned home from the motherland (Japan) from his LDS mission. In the movie "Steep," there is a scene where Glen Plake says something like, "As soon as I got out of broken legs, I went skiing. As soon as I got out of jail, I went skiing. That's where I had to go to make it all right." The first thing Aaron did was go on a different type of mission: skiing. Here he is with SLC in the background: 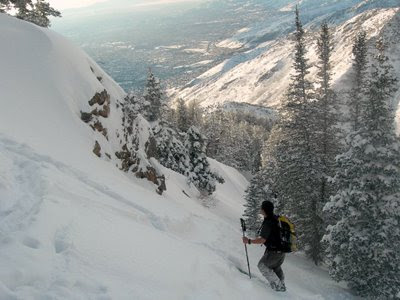 Last night, I skiied up around Alta, and it was deep. So this morning when I checked the weather and saw that Alta had received yet another 14 or so inches over night, I headed that way again, this time with Mike. Unfortunately, we got turned around at the mouth of LCC. The sherrif was setting up last night as I was coming down and it looked like he had been there all night. So, we went up the other canyon instead. Breaking trail was tough. On sidehills the snow line was above my waist, and I was on some big waisted Districts as well. My hair froze on the up track. 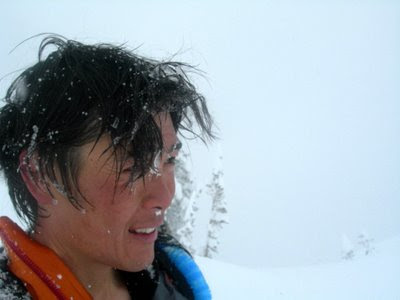 Here's Mike wallowing up a slope. I didn't see his skis all day, and they were fat too. 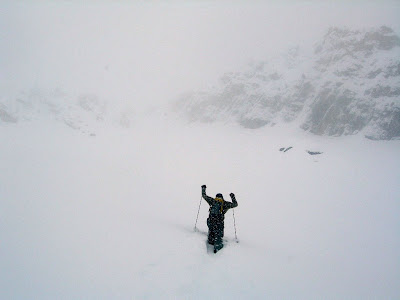 On a easterly facing high elevation aspect, I kicked off a new snow slide that propagated around the ridge. We were on high ground so, not too much danger. 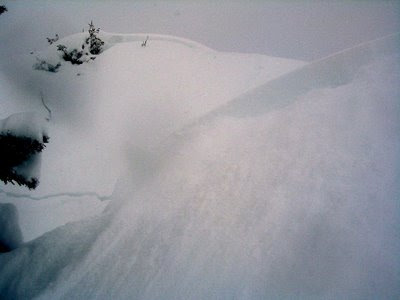 On the up track, we were pretty stoked about the conditions. After a run off the top, we were slightly confused. We weren't sure whether it was really good or not-so-good. The snow was super deep. Every turn snow would billow over the head and into various orifices. I skiied several hundred feet completely in the white room. I also skiied several hundred feet without oxygen. Mike skiied with his avalung in his mouth, not because he was scared of getting caught, but just so he could breathe. We sheepishly concluded that maybe it was too deep. 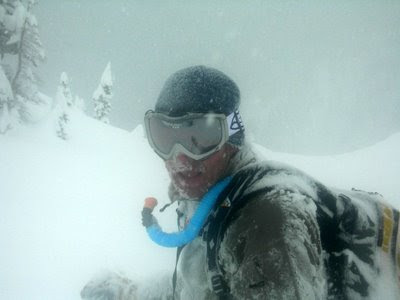 As we decended below 9000 feet, we came out of the clouds, the powder got less deep, and we had a couple epic runs. I'm not a fat ski guy, and I've often thought that my 110 mm waisted Bluehouse Districts might be overkill; today I doubt there is any ski that would have been overkill. 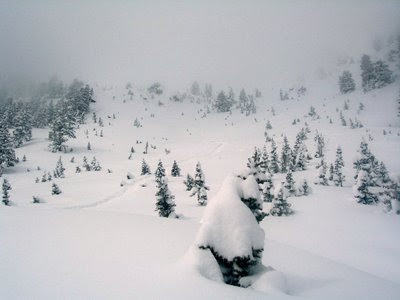 Today was a good day for K2 pontoons.

And I wasted it at a stupid bike race where I got so cold that I couldn't feel anything from the ankles down and the course was so muddy I lacerated my eyeballs. I couldn't see with my glasses on, so I took them off and let my eyes fill with mud.

If I were a horse, I would be shot to put me out of my misery.

Lemme know next time you're heading out on dusk patrol. I'd love to join you.

please send me a pic of my dad winning the bike race, to his email
Ali20vt@aol.com