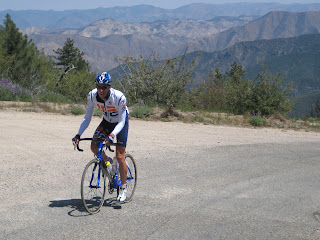 Ian was formerly a “local” from Jackson, Wyoming and raced a lot in the local races. Last fall, he relocated from Jackson, Wyoming to Mill Valley, California with his girlfriend, after which they broke up. Ian is still getting over the break up, which may explain his meteoric rise from a Cat 3 to a Cat 1 during the course of a few months. Ian and I recently had a conversation that went something like this:

SS: Congratulations, I hear you just got your Cat 1 upgrade. When you were suffering on the road from Logan to Jackson last September as a Cat 3, did you think you’d be a Cat 1 by May?

IT: Definitely. I really want to compete in Nationals this year. And I admit that it’s pretty cool to be able to compete at the top amateur level.

SS: How long have you been racing?

SS: So, have you ever won a race when you didn’t solo across the line?

SS: And I remember you soloing – barely – to the win at Garden Creek last year.

SS: So what about your stage win as a Cat 2 at Gila?

IT: It was somewhat of a flyer, but wasn’t really a bunch sprint. I saw Sohm take off, and I launched solo to catch him, caught him, and barely held off the pack.

SS: Yeah, I think you did the exact same thing in ’07 on that stage, except we were racing for 30th place in the Cat 3s. And what about your recent stage win at Hood?

IT: It was a circuit race of 5 laps. At the beginning of the 3rd lap, we caught a breakaway and thought it was a logical place to go. I expected others to come with me, but I guess everyone thought it was too early to go. I gained time on the uphill and the downhill and ended up sticking it with 1:35 on the group.

SS: You kind of attack where people are thinking, “it’s too early,” or “yeah right, like that will stick.”

IT: Yeah, but I think that’s how all breakaways happen. Usually when a break goes, everyone is thinking, gee that’s dumb, I don’t want to be in their shoes. But their the ones that make it, and everyone thinks it’s hopeless.

SS: Lots of breaks fail though.

IT: True. I guess in the end, you have to have the legs to back it up.

SS: It’s hard to stick it out solo for sure.

IT: I like it when it comes down to solo time trial. I like to be out there racing against myself. I think it doesn’t matter if the pack catches you; all that matters is that you give it everything you have. I always feel better after the races where I push my limits and really see where the limit is – even if I blow up in the end.

SS: So, how many times did you attack before you got away at Hood?

IT: Once. Lucky for me, some other guys brought the break back. It was a perfect time to go.

SS: What about Gila? How many times did you attack or cover attacks?

IT: The race was blown apart, and when I saw a group go, I thought it would be a good opportunity to bridge up to some of the splinter groups ahead. . . . so once, I guess. I was inspired that day because I got a random water bottle that said, “the harder I work, the luckier I get.” So I took extra pulls and we eventually became the front group.

SS: Do you ever put yourself in the wind when your not in a break?

IT: No. I don’t have any teammates. So, I’m either sitting in, attacking or bridging.

SS: How does California racing compare to Utah?

IT: I think the level is about the same. The difference is that there are bigger numbers in California (and definitely a lot more wannabe racers).

SS: So, I saw a picture of your bike. Is that Greg Lemond’s old bike?

IT: Funny. No, it’s a Pegoretti. It’s not steel. It’s aluminum. Handles better than anything I’ve had. It is a bit heavier though. It’s unbelievable.

SS: How much does it weigh?

SS: So, how did you get so strong this year?

IT: Well, I’ve been coached by the same guy for three years now and attribute a huge amount of my success to him. He’s been an incredible mentor for me. A lot of the training is counter intuitive. Sometimes I think I’m going too hard before a race. But he knows what he’s doing and has been a key to my success.

SS: Does your coach tell you exactly what to do?

SS: Do you ever think, my coach doesn’t know me, I feel tired, so I’m not doing this workout?

SS: Lots of trust there. Did you do any base training?

IT: Not really. The season starts here in January, so I used racing to train.

SS: How many hours do you train?

SS: So, what’s the secret to your success?

IT: Well, I’m really focused. I don’t have a family. My job is racing oriented. I really don’t have any distractions.

SS: Do you train with a power meter?

IT: Yes. But I’ve never downloaded any information. I don’t really mess around with it. I look at it when I ride my bike, but that’s about it. I don’t like to get hung up on numbers.

SS: So what do you use your power meter for then?

IT: Just to stay in my zone, whether I’m going easy enough or hard enough.

IT: No. No. I use it in training a lot. But I don’t like using it in racing. It doesn’t matter whether you’re putting out high numbers or low numbers. All that matters is where you come in relative to everyone else. I don’t like having false boundaries. They inhibit performance.

SS: Have you done specific training to improve your LT?

SS: Do you know what your power is at LT?

IT: I’d rather not say. It doesn’t matter.

SS: So, what’s your power to weight ratio?

IT: Don’t know. I haven’t used a scale for four months.

SS: So, I’m still confused. The whole purpose of this interview was to figure out how you got so fast, so fast. What precisely did you do?

IT: Well, I just told you. I listen to my coach and I ride.

SS: So, the secret is that there is no secret?

IT: Something like that. Seriously, I think we let our minds and our egos get in the way. I think one of the things I like about cycling the most is that it gives me an opportunity to break through mental barriers. We are often limited by what we think we are capable. If you just “go with it” and ride hard and let the body work and just go fast, sometimes you surprise yourself and break through to the next level.

SS: Thanks Ian. Great conversation. Best of luck to you at Nationals. Ride fast and go pro!!

Cool! Yeah, I remember chasing Ian at GCG 2007 to no avail. I think we were covered in dung when we talked. ;-)

I remember him coming past me like a freight train at the Gila! nothing I could do! that was a fun race!

Um, I think this blog is due for an update.