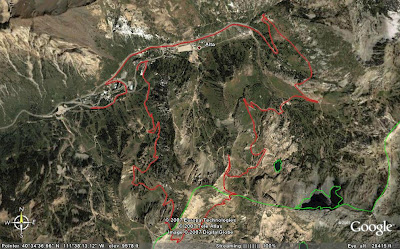 yea a great trail over catherine's pass, you can also hang south and drop over to pole line pass in AF canyon.
later

It must have felt 26 miles to me since I rode around Snowbird for an hour waiting for Jared to show up, and then for another extra half hour while Mr. Inouye was billing time on a confernece call half way to the top. Fun ride with great scenery and great company; however, the dirt roads at the Bird and Alta were fair (steep and loose in places). Perhaps the trails Bart refers to are better. Anyway, thanks for the ride Jared!

Jared, you look HUGE!!! Hope your at Harvest Moon...