Tour of the Gila 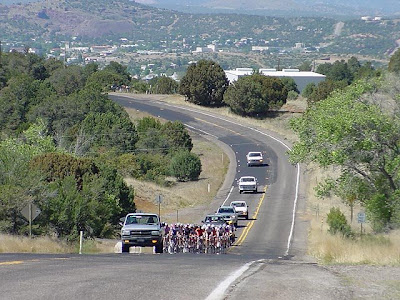 It's been awhile. Over the last few weeks I've been busy training for the Tour of the Gila, a five day stage race. I put in a pretty hard month leading up to the Gila. Since I had never done a 5 day stage race, I didn't know quite what to expect. I asked people (like Rob) who had done it before and they gave me helpful pointers, like ride lots of hills. So I rode lots of hills. But even though I built up some decent fitness, I wasn't prepared for the Gila.

My next statement should be tempered by the fact that I've only been seriously road racing for a little over two years. The Statement: the Tour of the Gila was by far the hardest race I've ever done. Of course, it was probably the most rewarding race I've done -- simply because I finished. Some of the highlights underlying the Statement are as follows:

Day 1 was a 16 mile TT with "hills." The first 3-4 miles were a steady uphill climb, steepening toward the top. Since the Pros went off first, we positioned ourselves at the top of the first climb and watched the likes of Moninger, Baldwin, O'Neil, Bajadali, Swindlehurst, Creed big-ring it up the climb, even the steep part. Note that because of the fast downhill finish, most everyone was using a 55 or a 56 tooth ring.

I started my TT with a big ring. I figured that if the Pros need to big ring it to get as fast time, that's what I needed to do. So I big ringed it up the climb -- actually not all the way up. At about mile 3 or 4, as I was beginning to bog and as my HR was about to touch 190, I had a revelation: I am not a Pro. Quickly, I shifted down to my 39 ring and tried to go hard and recover at the same time, which is somewhat like smiling and frowning at the same time.

When you are suffering during an all-out 40 minute effort, all of the sudden you have odd regrets, like man I wish I wouldn't have eaten that bag of Hot Tamales yesterday, OR I should have shaved my legs -- how much time am I giving up by having stubble? OR I should have covered the valve hole on my disc wheel. You also make odd committments, some of which included, I am never going to eat sugar again and am going to lose 30 pounds, OR I'm going get a coach, OR I'm never going to get on the bike again.

Every stage, including the TT and Crit stages, had hills in them. The road race stages had some pretty serious climbs in them. After the beating I took in the TT, I resolved that I would give it everything I had on Day 2, which had a steep uphill 5 mile finish. On Day 2, I conserved until the end and as soon as we hit the steep climb, launched an attack. This was, perhaps, the most beautiful moment of the whole race because for a few seconds I was off the front, away from the pack, and I had an open road in front of me. It's just too bad that this moment only lasted a few seconds. Shortly after my Valverde-like attack, a group of 10 or 15 riders bridged up. At this point, the moment was still beautiful because there was a small group of us that had cleared the peloton. Things got a bit uglier after that. You can only ride in the red so long, and I learned that my red was only several of the riders' green. As I rode the longest mile of my life, I helplessly watched as other riders rode ahead of me to the finish. I finished 21st that day.

Day 3 and Day 5 also had large climbs in them. Day 3 came as the biggest surprise. It is called the "Inner Loop" race and because it doesn't have an uphill finish or isn't named the "Gila Monster," I didn't give it the respect it deserved. Day 3's race opened up with a very serious climb, one that I was not prepared for. At one point, we were going up a 5% grade going over 20 miles an hour. We had been going all-out for a solid half hour and there were probably only 30 of us left. About this point, I had a full-scale mental meltdown. As we were flying up the grade, I looked at my HR, which read 186 bpm. I thought, wow, I don't know if I can sustain this any longer. Then I looked up and saw a sign that said "1 mile to go to Feed Zone." I thought, 1 mile? And then I remembered yesterday's long mile and my confidence began to crumble. Then I looked over at someone's speedometer, and I think I saw "23 mph." Whether I saw that or not, didn't matter, because since that's what I thought I saw, I thought that's too fast, I definitely can't sustain this. And then I looked ahead and the road steepened. At that point, I crumbled and shot straight out the back. On refelection, I don't know how much was physical or mental -- probably both -- but I'd like to have that moment back to see whether I could hold on.

The consequences of the Meltdown were severe. Since the climb came in the first 20 miles of the race and the race was 70+ miles, that meant that I was off the back, chasing for 30-40 miles. The chase hurt. In fact, it made Day 3 the hardest race I'd ever done. To top things off, after chasing for a solid two hours, I finally caught back on to the group. Just as I began to bask in the comfort of the peloton (about 2 minutes), we hit a climb with a brutal headwind. Since the chase had taken its toll, I went straight out the back again, and had to ride the last 20 miles, which was comprised of three climbs, into a brutal headwind.

On Day 2, I had a weird allergic reaction. Since I had similar reactions living in Las Vegas, I wondered if I am allergic to something in the Southwest desert. In any event, my allergies made things miserable. I took three kinds of antihistamines and after Day 2 had to lie in bed the rest of the day with tissue stuck up my nose. The days after that were complicated by the allergies, and during several parts of the races, I was racing on one nostril. Luckily though, when the adrenaline level my my heartrate picked up, the allergic symptoms would subside so that they were tolerable. My solution to the allergies: ride hard.

I saw (and experienced) several crashes throughout the week. Perhaps the most unfortunate one was experienced by Matt, who I rode down and roomed with, on Day 2. The guys in front of him weren't paying attention, crossed wheels and caused a pile-up. I watched one rider ride straight into the pile up and launch Superman-style right over the handlebars. I suspect that rider's bike was stopped by one of Matt's body parts.

Because of the wicked climbs in the Gila, there are also wicked descents. I lost my nerve a couple times and was unable to take the switchbacks at speed. On one switchback on the final stage, I completely lost it. I had just attacked a group of 10 riders, had bridged up to a group of 2 riders, and we were working hard to stay away from the group behind us. Going around a switchback, I took a turn too wide and too fast. There came a point where I had 1 of 2 options. Option 1 was to try to turn the bike, but risk sliding out and laying the bike and me down. Didn't want to do that. Option 2 was to take a straight line and hope that I could keep the bike up. I took Option 2, and took a straight line off the edge of the road, fully locked up my brakes, careening through the gravel and bushes, and came to a rest in front of a large boulder. As I came to a stop, I unclipped, lifted my bike over my head, climbed up the enbankment, just in time to join the group of 10 that I had just attacked. I don't know if they were happy, but they surely were amused to see me.

In conclusion, I was thrilled just to have finished the race. I ended up 32nd on GC (out of 75 who started). During the race I swore that I would never do it or anything like it again. . . . I'm already planning for next year.
Posted by Jared at 9:19 PM

Nice report, I have been considering this race for 2 years. Maybe next year...

Ha! Great stuff. It's like a crazy dream now, but I love to re-live it. And ps, I think I was the dude that supermanned off Matt's body parts!