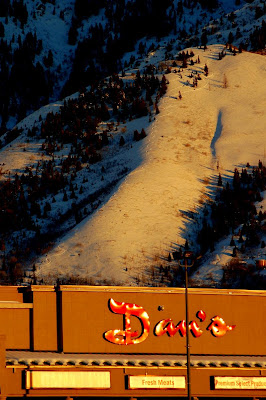 Some would say that a picture of backcountry tracks in the same picture as a large grocery store is a paradox. Not in SLC though.

Due to a lingering sinus infection/stomach flu, it's been tough to fulfill the "training" aspect of this blog. However, yesterday after work, I thought that I might as well contribute to the "adventure" aspect -- assuming that you can call backcountry skiing in full view of SLC an adventure.

So, after work, I drove up to the neighborhood trailhead and started skinning up the hill. From my house and 215 it looks like the point of departure is simple to find. It wasn't. This is because of all the scrub oak at the base of the hill. So, after and hour of world class bushwhacking and wallowing through thigh-deep snow, I finally found a ridge to ascend.

Skinning up the ridge wasn't difficult. Midway up, I was amused by what looked like sled tracks running down the ridge. Maybe it was same guy who became famous after sledding 3000 vertical feet at mach 10 down Superior. What was cool about skinning up the ridge was that I had a full view of the SLC. The descent was ok too. Again, the coolest part was descending with SLC at my feet. I guess this is one more reason I like this valley so much.

when I lived at the base of Millcreek I skied and sledded that hill all the time. Good stuff when the we have the snow.

Jared- sweet blog. Thank Bart for the link, now you got some more readers- Eric

Hey Eric. Cool blog yourself. One of these days I'm going to try to make your group ride. Sounds like a good one.